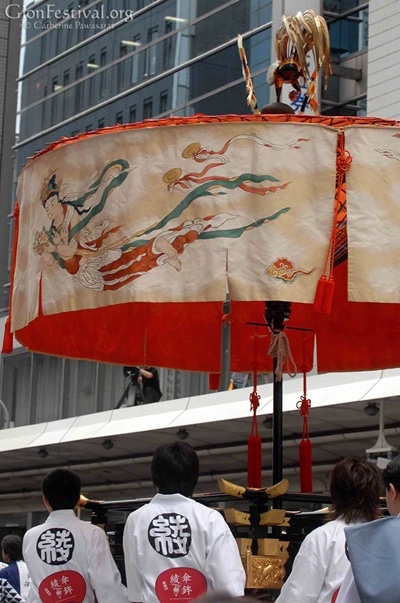 Ayagasa Boko’s umbrella shape hearkens back to the festival’s earliest 9th-century days, when the floats started as different kinds of halberds, banners and other tall pole-type instruments that could be carried.

Ayagasa Boko’s dance and music combination may be some of the most historically authentic of today’s festival: it resembles a 17th century painting of the Gion Festival on a folding screen owned by Kyoto’s Buddhist University. Due to evidence like this painting, some accounts argue that the Gion Festival historically included dance and ritual theater, as well as music. 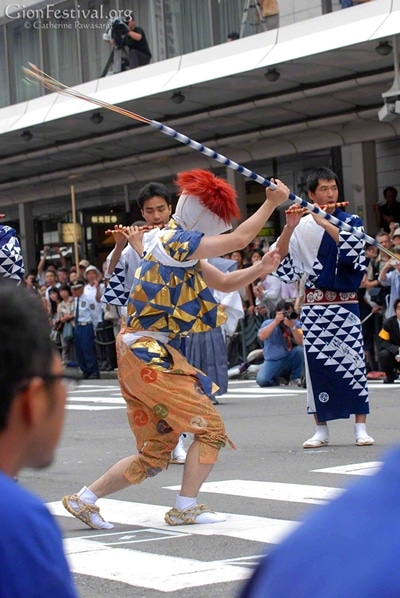 A mesmerizing combination of music and dance, timing and coordination.

Moreover, this dance and music combination most easily evoke the shamanic roots of the festival music. Like most traditional festivals, the Gion Festival was designed to communicate between humans and the supernatural – to placate vengeful spirits, welcome benevolent ones, or please the ones who could go either way. This could be considered what we call today a kind of shamanic journey or vision quest.

Though this float is a recent incarnation (reestablished in 1979 after a century-long absence from the festival), it’s known to have existed for at least five centuries. Visit the treasure display on the small temple grounds to see a painting and model of the larger, wheeled Ayagasa float that burned down in the great fire of 1864.