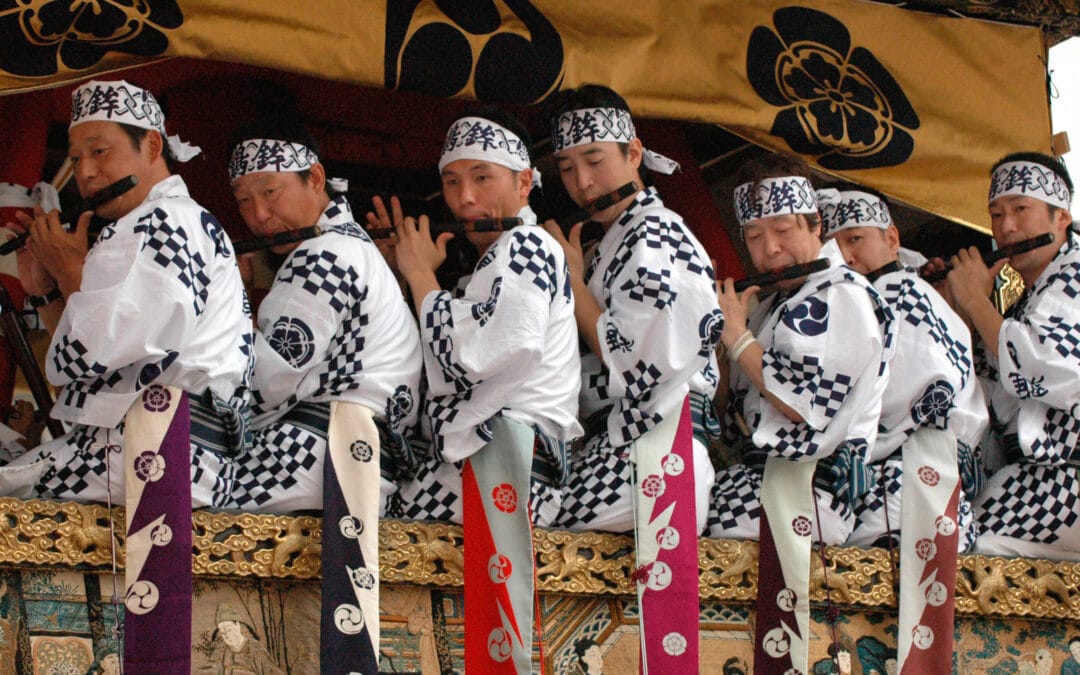 An Overview of Japan’s Most Famous Festival 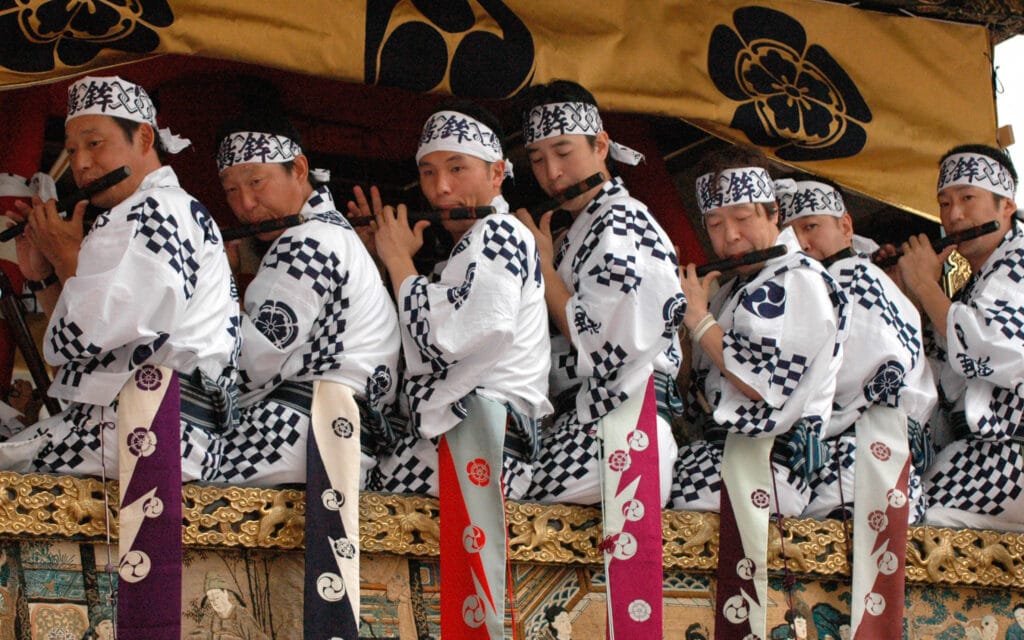 Shining as the best-known festival in Japan, the Gion Festival takes place every year over the whole month of July. It’s a testimony to the community spirit of downtown Kyotoites that this annual festival has taken place almost continuously since it started in the year 869.

While consisting of an array of events, the most visually stunning are the two grand processions of floats (Yamaboko Junko) on July 17th and 24th. The procession won recognition as a cultural World Heritage event by UNESCO in 2009.

During the days leading up to the processions, visitors can watch the gigantic float structures being built and adorned with treasures. Wandering the streets rewards us with cultural riches displayed at the floats and in private homes.

The three nights before the processions (called yoiyama) offer diverse feasts for the senses, including phenomenal people watching. We can enjoy getting lost in the crowds amidst the otherworldly music, boisterous festival street life and intriguing food stalls.

The festival originated with a ritual in the year 869, to placate angry spirits believed to be casting pestilence upon the Kyoto populace. Later that morphed into an annual ritual of processions to please nearby Yasaka Shrine’s residing deities, and to request purification of any harmful energy for the year.

Fast-forward to the 20th century, and modern hygiene relieved Kyotoites of the illnesses related to its mid-summer rainy season. However, the torrential rains continue to fall every July, reminding us of the festival’s raison-d’etre. When festival-goers feel oppressed by the heat and humidity or occasionally get caught in a downpour, what can we do, other than step into a dry and cool shopfront, and pray for relief?

Weather doesn’t deter many. More than a million visitors a year testify to the spectacular nature of the Gion Festival.

The word yamaboko refers to the two kinds of floats featured in the festival: 10 gigantic hoko and 23 smaller yama. It’s impossible to remain unimpressed by the gargantuan hoko, which are up to 25 meters tall (including the spares, they rival a 8-storey building), weigh up to 12 tons, and are pulled on wheels by tens of heaving men.

Incredibly, they consist of simple timbers lashed together with beautifully symmetrical lengths of rope. Fit with gigantic wheels and decorated with priceless artistic ornaments collected over centuries, and voila! Yamaboko have been called “moving museums,” and represent a globally unique collection of textiles and other artwork, viewable close up and with no glass between you.

Though the hoko are stupendous, size isn’t everything. The yama are associated with more residential neighborhoods. Here one may enjoy the traditional convivial feeling of the festival from decades gone by, away from the madding crowds. Not long ago it was a neighborhood affair, when people walked a few blocks to sip tea and visit with friends. Exploring the back streets and festival limits, you can still relish in this laid-back atmosphere.

Each yama is dedicated to a unique deity or deities – from a Zen master, to warrior monks, to the bodhisattva of compassion. The original deities’ spirits are believed to reside in their sculpted likenesses, artistic masterpieces in their own right, and are revered during the festival in local, sometimes temporary shrines. The traditional architecture is itself exemplary.

While the July 17 procession features 23 yama and nine of the ten hoko, the July 24 procession stars 10 yama and the recently re-introduced Great Ship Hoko. The later part of the festival is generally smaller, quieter and more intimate. The earlier part is an intense sensory extravaganza that you will never forget.

The only times the annual festival has been interrupted since 869 were during major fires and major wars, when the local neighborhoods were razed, the local population decimated or scattered.

Each time the local neighborhoods have joined together to bring the festival back to life, making it a major source of civic pride.

Nowadays challenges to the festival include the changing urban landscape, skyrocketing real estate prices, rapid residential population overturn, and even the touristic turn the festival’s taken.

After lasting for 1100 years on the basis of community cohesion and cultural and spiritual devotion, can these qualities adapt to modern life? With so many visitors, how might festival attendance help ensure its perpetuation? Gion Festival presents a unique sustainability challenge.

Tea shops sprung up in the Gion neighborhood to serve the pilgrims, entertainers lightened their spirits, and refinement of the entertainment eventually led to the geisha culture. The links between geisha, Yasaka Shrine, and the Gion Festival continue today.

Meanwhile, nearby – on the other side of the Kamo River from the shrine and geisha – the center of Japan’s kimono industry thrived.

As Kyoto’s kimono merchants grew richer over the centuries, the festival became an opportunity to circumvent Kyoto’s strict social mores. Government-imposed regulations – regarding clothing and building facades, for example – were designed so that only aristocrats could openly exhibit personal wealth.

However, these rules didn’t apply to the Gion Festival floats. By adorning the floats with flamboyant and exotic treasures, wealthy kimono merchants flaunted their riches and accompanying cultural erudition. It was an indirect, but not-so-subtle way to thumb their noses at their social betters.

While Kyoto aesthetics are generally known for their simple restraint, Gion Festival floats are beyond baroque. Their decorations virtually ooze with gilding, baroque metalwork and eye-catching tapestries, all juxtaposed willy-nilly in a small surface area. And all layered with spiritual and cultural references.

A series of tapestries displayed by various yamaboko, for example, depict different scenes of Taoist Immortals performing miraculous feats with their supernatural powers. The Tsuki Boko float’s ceiling features gilt paintings of an array of fans, each one containing a different scene from the classic Japanese novel, Tale of Genji.

Getting into community spirit, historic kimono families and companies openly display their private heirlooms throughout the festival. Usually known for their exclusivity and privacy, this act of generosity is known as the Folding-Screen Festival (Byobu Matsuri).

Though both the kimono industries and geisha “floating world” have diminished in size and social role, these two still come together during the Gion Festival. Kimono culture still forms a backbone of the festival, and geisha make formal and informal appearances throughout various festival events, looking remarkably unperturbed by the summer swelter.

Street food stalls and people-watching aside, the Gion Festival is not a Mardi Gras-style party: the floats and processions are formal and stately. However, the festival does have a shouting, sweating, stomping side that can be easy to accidentally miss.

On the dark night of July 16, portable shrines are hoisted on the shoulders of hundreds of boisterous, loincloth-clad men at Yasaka Shrine. Shimmering and shaking, they are heaved and tossed, golden ornaments fluttering, several kilometers from their permanent shrine residence to a temporary abode in downtown Kyoto.

The three portable shrines go different circuitous routes, the deities inside purifying shrine parishioners’ and their homes for the year to come.

Then from July 17 to 24, the Yasaka Shrine deities “visit” downtown at the intersection of Shijo street and Teramachi Street, a kind of spiritual public outreach. If you pay attention, you can see how these small but very ornate mobile shrines are an energy focus of the processions. The floats pause as they pass by, to pay respects to the deities and request purification for the coming year, until the next rainy season.

On the night of the 24th, the mobile shrines get pitched and shaken all the way back to Yasaka Shrine, taking up residence there again for the rest of the year.

By the end of July all the festival goers have been purified by various Gion Festival deities and the array festival ceremonies. We can all look forward to an excellent year, until it’s time for another Gion Festival.

* (As featured in the book, Memoirs of a Geisha, by Arthur Golden)