Koi Yama 鯉山 – The Carp That Became A Dragon 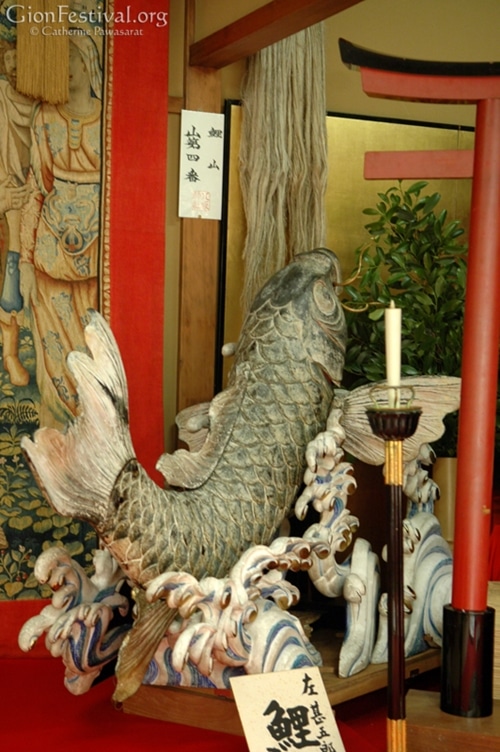 This humble carp represents a profound spiritual and physiological metaphor.

The Koi (“Carp”) float features a Shintō shrine adorned with a wooden carving of a giant carp. Koi Yama’s carp is swimming up carved wooden waves combined with spun hemp, representing a waterfall. This refers to an ancient Japanese legend about a carp that persevered to finally and miraculously ascend a waterfall. Thereupon it transformed into a celestial dragon, and flew off effortlessly into the sky. From this legend, the koi has become a popular folklore symbol in Japan, inspiring us to overcome any daunting odds. A more esoteric tradition symbolizes the culmination of the ultimate challenge: overcoming the suffering tied to our ego clinging. This results in the rising of kundalini energy at the moment of satori, or enlightenment. In addition to their spiritual value, the festival’s sacred statues are centuries old, and artistic masterpieces in their own right. 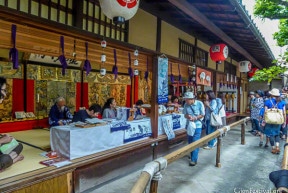 The Koi Yama treasure display area opens up after a narrow walkway. This is a traditional urban planning / architectural style of old Kyoto.

Koi Yama’s chōnai is proud of its European tapestries, originating on the legendary looms of 16th-century Brussels. The Japanese government designated the central piece an Important Cultural Property. The original was long ago divided up and rearranged to fit the sides of its float. In 1979 the Koi Yama chōnai commissioned European research on its tapestry (see Niwatori Boko for more on these tapestries). The Gion Festival boasts three tapestries from a set. Research revealed these are the only known examples worldwide depicting scenes from Homer’s The Iliad and the Trojan War. Koi Yama’s shows King Priam and Queen Hecuba. Furthermore, these tapestries were likely gifts from Pope Paolo V to Daimyō Date Masamune‘s little-known 17th century diplomatic/trade mission to Europe. They entered Japan as contraband just as the Tokugawa shōgun closed Japan to limit foreign influence. For more see Niwatori Boko.