The diverse tapestries adorning the 33 Gion Festival float exteriors represent a globally rare collection. Together they span over 400 years, and a geographical area from Japan, through China and Persia, to Belgium’s Gobelin workshops. Some of the textile types exist nowhere else; as a collection, the diverse provenance is unique.

From 1639 to 1853, trade with the outside world was almost prohibited in Japan. Kyoto kimono merchants’ ability to get around these laws and import exotic foreign goods dazzled the populace and flaunted their power. Many textiles visually depict fascinating tales, from meetings of Taoist sages, to the saga of Helen of Troy. Imagine how exotic and evocative they were hundreds of years ago! 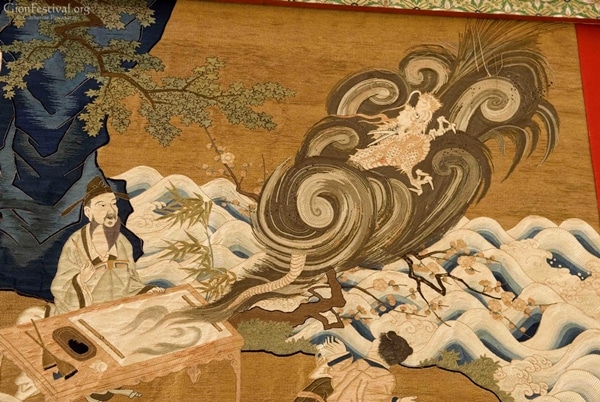 After painting a dragon on a piece of paper, a Taoist sage watches his creation take flight into space. Japanese embroidered textile from the Kakkyō Yama (“Great Wall” float) 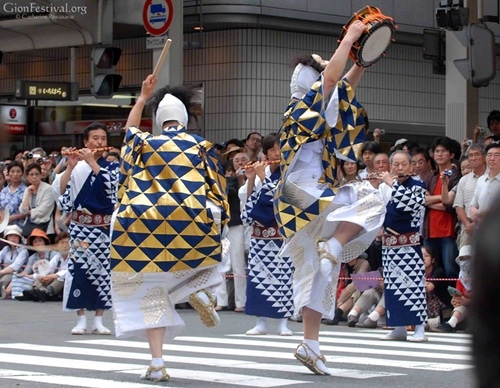 Talk about coordination! Getting the steps and the drum rhythm right.

In addition to the displays of the festival’s visual treasures from 10-24 July, rehearsing float musicians serenade downtown neighborhoods with their otherworldly music. To unaccustomed ears, the music may sound disharmonious, or possibly unsettling. It becomes more intriguing when one realizes that the music has its roots in shamanic ritual, with speeds and rhythms designed to bring a shaman or dancer into a trance-like state.

Something along these lines can still be glimpsed in the Gion Festival today, at the Ayagasa Boko (“Damask Umbrella” float). Though ancient screen paintings depict several of the floats with dancers centuries ago, it is the only float to feature them today.

Meanwhile, local families and businesses get in on the Gion Festival spirit of generosity to the public in a sub-festival called the Byōbu Matsuri (Folding-Screen Festival). As you walk along the streets, keep your eyes open for window displays of priceless folding screens, suits of armor, kimono and other family heirlooms.

This is entirely at their discretion. Feel free to reciprocate their hospitality with a smile, wave or “thank you.” You might make some new friends, or at least warm some hearts.