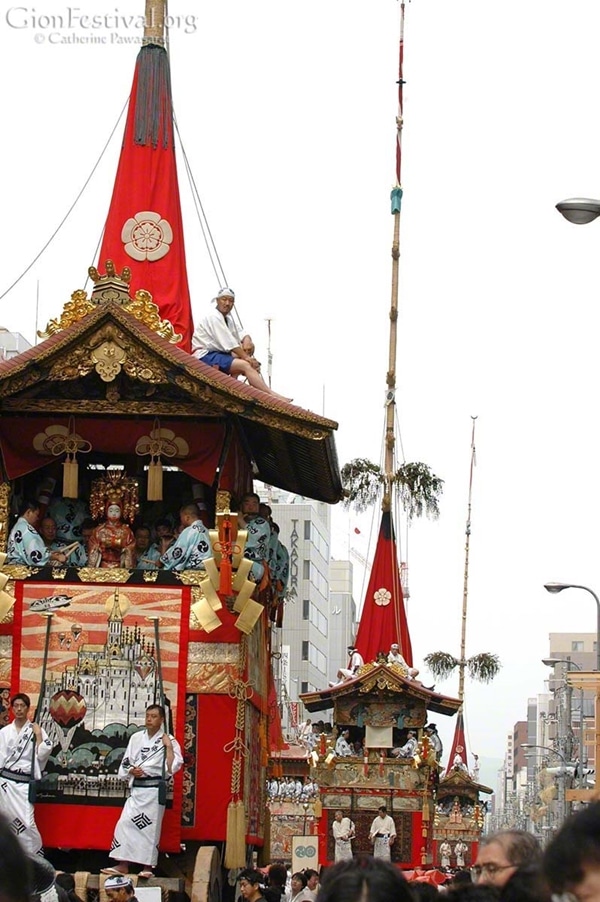 Four hoko wait to start the junkō procession on 17 July.

The Gion Festival’s 33 yamaboko or floats are arguably its most famous feature. Actually, the Gion Festival’s true luminaries are the many deities that it celebrates. Maybe you can sense them, but deities are generally invisible. So the festival’s spectacular yamaboko capture most of our worldly attention.

What’s do you need to know about the Gion Festival yamaboko? Firstly, yamaboko come in two types of float: yama and hoko.

The Gion Festival’s far more enjoyable when we understand what we’re looking at. This website is designed to help. Click the links in the drop-down menus at right for highlights of each yamaboko. Or keep reading for an overview.

What’s the difference between yama and hoko?

How big are the yamaboko? In general – though not always ­– the hoko are gigantic, multi-storeyed floats. Weighing up to 12 tons, up to 50+ men pull them through Kyoto streets by thick, long ropes. Six of the ten hoko feature an elaborate central pole or shingi adorned with various ornaments as their crowning glory.

The 23 yama are generally smaller. Instead of a shingi, they feature a pine tree as their connector to the heavenly element. They’re rolled on wheels by groups of men holding shoulder-level wooden supports. 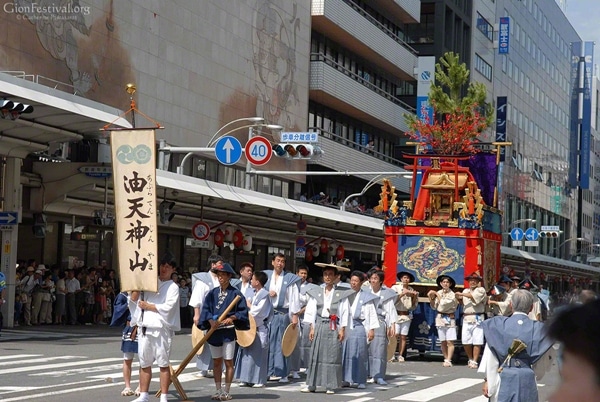 But yamaboko don’t simply make two tidy groups. Some of the yama look like hoko (such as Kita Kannon Yama, Minami Kannon Yama and Iwato Yama). Some of the hoko are small and shaped like umbrellas (Ayagasa Boko and Shijo Gasa Boko). Others look like boats (like Fune Boko and Ofune Boko).

The best yamaboko: it’s not about size

Typically, the yama are less opulent than their hoko counterparts. But each yama provides us with an opportunity to experience the festival in a more traditional way. Locals share that before the Gion Festival got so famous (and busy), they’d enjoy visiting one another for a cup of tea.

Some of the yamas’ treasure display areas still offer this experience.  Here residents and visitors alike can enjoy the float’s decorative treasures as well as one another’s company. You can too.

Once more, learn more about each yamaboko float by clicking on the individual links in the sidebar at right.