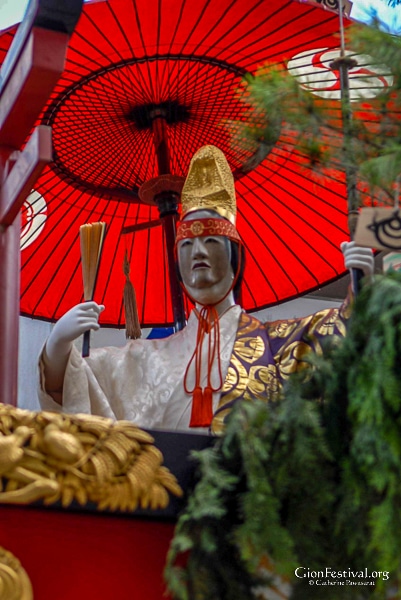 Not the usual Japanese female archetype: The goddess Suzuka, protectress of travelers, wearing a noh mask, men’s attire and wielding a halberd.

The Suzuka Yama float pays tribute to the goddess Suzuka Myōjin, protectress of Mt. Suzuka, a mountain peak that straddles Mie and Shiga prefectures. It was on the vital Tōkaidō road linking Edo and Kyoto; its steep paths were ideal for bandit raids, which over time turned into tales of a terrible demon.

Legend has it that the goddess Suzuka vanquished the demon: a red-haired “scalp” at the base of the pine tree to the left of the sacred statue represents the demon’s head. The noh mask she wears indicates her status as a goddess, and she’s also clearly a warrioress – she’s dressed in men’s attire, wearing a sword at her waist and wielding a naginata or halberd. Trade via the Tōkaidō was vital for Kyoto commerce, so Suzuka Myōjin is revered for establishing safety for travelers and merchants. 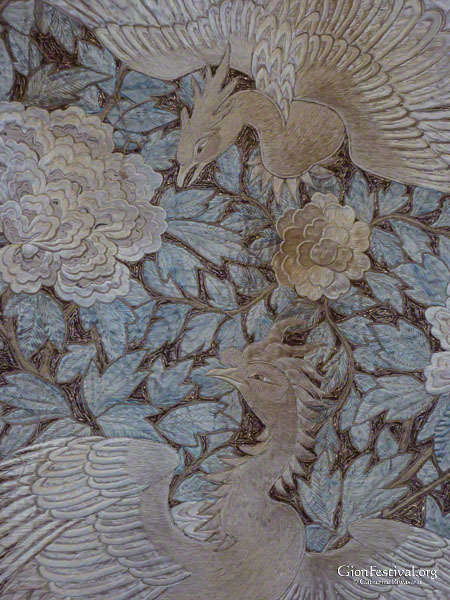 There is a noh song entitled “Suzuka Mountain” that once was sung in this part of the country, and nowadays is only sung in northern Japan. It’s unclear whether the sacred statue of goddess Suzuka wears a noh mask because of this connection, or whether this is a tradition for sacred statues of females in the Gion Festival, since Empress Jingū also wears noh masks at Urade Yama and Fune Boko.

Just a few doors south of the float is located a high-end folding-fan shop, featured here, specializing in fans for noh theater. You’ll marvel at the artistry that goes into these beautiful works.