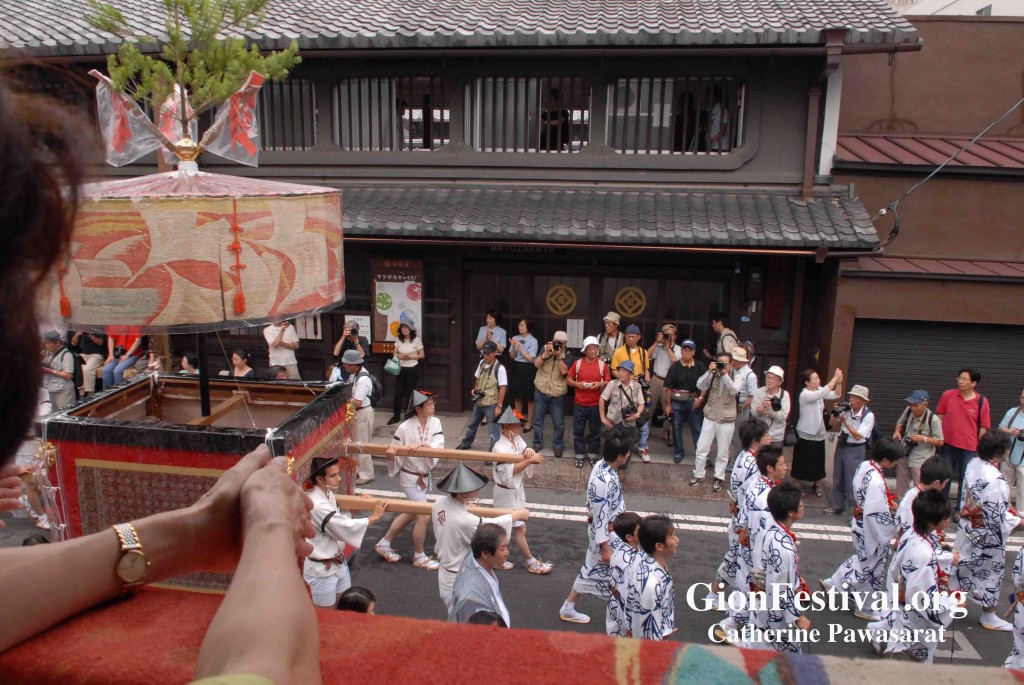 Shijo Kasa Boko references what the Gion Festival floats looked like centuries ago.

Local residents reintroduced Shijō Kasa Boko to the festival in 1988, after a 117-year absence. As you can imagine, this is no small undertaking. Today the Shijō Kasa Boko shows us what some of the Gion Festival floats probably looked like in the Muromachi Period (1337-1573). History tells us the floats started out as pikes or halberds. Eventually, over centuries, they morphed to their current forms. The highlight of the Shijō Kasa Boko is its children’s dance and music. With Ayagasa Boko, it’s unique in the Gion Festival saki matsuri‘s July 17 procession. In the dance, two boys wear costumes and “bear wigs” wave long poles in a lively dance. And six more boys accompany the dance with various percussion instruments: bells, drums, and clave sticks.

This float’s history is somewhat mysterious: it disappeared in 1872 and there are no records explaining why. We know that a great fire in 1864 destroyed many floats. But records show that Shijō Kasa Boko wasn’t one of them. We also know Shijō Kasa Boko participated in the Gion Festival from 1864-1871. And one exciting thing about the Gion Festival is how many mysteries await research and re-discovery. As people’s interest grows, new evidence and facts continue to come to light. So when the Shijō Kasa Boko community decided to revive its float in 1975, they needed to do some sleuthing. They spent years researching historic documents and artwork to understand details of what the float, dance and costumes had been like. How did they do this? For example, festivals, dances and other cultural forms around Japan were copied from or inspired by the Gion Festival. In some cases they disappeared in Kyoto, but still exist elsewhere. Research on Shijō Kasa Boko showed that a shrine dance in Shiga Prefecture is closely related to the historical Shijō Kasa Boko dance. The community referenced this shrine dance to revive its own in 1988.