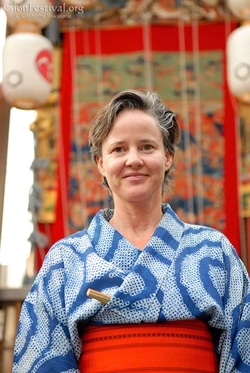 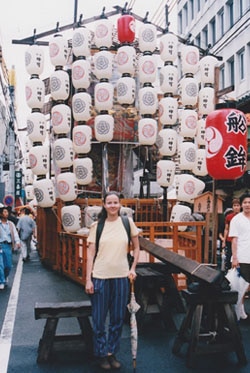 My name’s Catherine Pawasarat. I’m the creator of GionFestival.org and the leading non-Japanese Gion Festival expert. Some Gion Festival folk kindly say I know more than they do.

How did I Become a Gion Festival Expert?

In the early 1990s, I won Japan’s bubble-era jackpot and lived in a beautiful traditional Japanese home with a gigantic garden. Remarkably it was right in downtown Kyoto.

One July morning I ran out my front door and nearly crashed into a gigantic wheel about the same height as me. “What the … ?!” I thought. Some Japanese men busily worked on wooden timbers around the wheels, ignoring me.

When I got home later that day, the wooden timbers had taken shape as a festival float. It was decorated with a wonderful variety of textiles, like nothing I’d ever seen.

I had no idea what any of it was or what it was doing there.

With my fat Japanese dictionary in hand, I started walking around the neighborhood and asking questions. I’ve been researching the Gion Festival ever since.

As its mysteries continue to unfold, it gets more interesting. 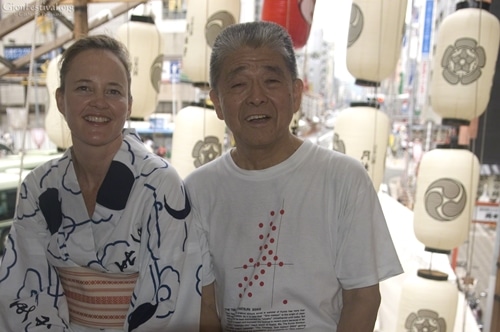 One of the festival’s greatest treasures is its community.

I became a Gion Festival expert the old-fashioned way. I spent a lot of time listening to people closely involved. They described their experiences and what they learned from people before them. I also did a lot of observing. More specifically, over the last 30 years, I’ve:

It was thanks to Diane and our time together at the stupendous Portland Japanese Garden that I realized I’d become a Gion Festival expert. 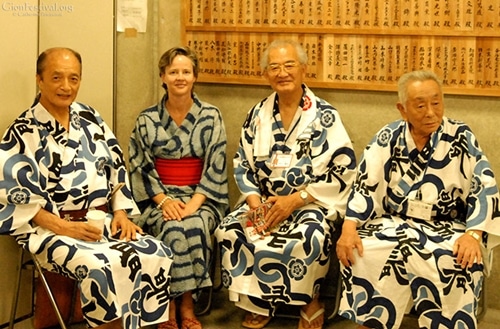 Much of the Gion Festival history and experience is still transmitted by word of mouth, making elders living archives.

What’s the difference between me and Japanese festival patrons?

Some of the festival elders have participated in it since they were small children. Some families and businesses have supported the festival for hundreds of years.

Generally, tradition dictates that festival participants focus on the privileges and requirements of their own neighborhood’s float. There are numerous Gion Festival experts within the community who know a lot that I don’t. But few have had the opportunity or inclination to get to know all 34 floats.

And did you know that the Gion Festival is officially all men? This is the prevailing tradition today. So it has special meaning that a woman could become the leading Gion Festival expert.

Given that I didn’t grow up in the Gion Festival neighborhood nor in Japan, I’ve learned about it all starting at close to zero. I hope my learning and exploration may enrich – and speed up – yours.

This website is just the tip of the iceberg, a peek behind the Gion Festival’s silk curtains, so to speak. To learn more, about the spectacular Gion Matsuri than you can anywhere else, buy my book, The Gion Festival: Exploring Its Mysteries. Some former directors of Gion Matsuri float associations have told me they believe it’s better than any books available on the Gion Matsuri in Japanese. Please enjoy a gift excerpt here.

Please note this site is for travelers, meaning-makers and explorers, as that’s my background. If you resonate with that, let me know your Gion Festival interests via the Contact Page. That helps me understand better what feels relevant to people like you.

I appreciate some people need basic information about visiting or staying in Kyoto. And there are lots of specialized websites that do a better job than me of serving tourists’ needs.

I often ask myself, how is it that so few non-Japanese have heard of this country’s most famous festival!? Till now there wasn’t much available on it in English. And sorting through all the specialized vocabulary and history has taken a few decades of my spare time.

But now you can learn about the Gion Festival fundamentals in English easily on my website and in my book. Surely a thousand Gion Festival-related grad-school theses and international museum exhibits are wanting to happen! Are you the one to help it come together? Are you a budding Gion Festival expert? I’m here to help.

Interested in sharing content I’ve created? Check out the Creative Commons Attribution-NonCommercial-ShareAlike 4.0 International License. These guidelines provide an easy way to grow a culture of generosity, in line with the philosophy of sacred commerce.

We’re in this Gion Festival Together

As Gion Festival visitors, we’re also festival participants. Most of all I hope that sharing the wonders of the Gion Festival inspires visitors to enjoy their time at the Gion Festival as supportive members––even if only temporary ones––of an increasingly diverse international community.

As we share in the riches of the Gion Festival, it’s within all of our power to honor its traditions in our own small way. In so doing, we get to help gift them to another millennium of future generations.