The best-known aspects of the Gion Festival are divided in two parts: the larger saki matsuri (“early festival” from July 10-17) and smaller-scale ato matsuri (“later festival” from July 18-24). While the floats decorate the area around Karasuma Shijo intersection, a parallel celebration called shinkosai relates more to the resident deities at Yasaka Jinja shrine, in the easternmost part of the Gion neighborhood. The saki matsuri peaks on July 17 with the procession or parade of yamaboko floats. That night, thousands of men carry the mikoshi portable shrines on their shoulders, bringing the Yasaka Jinja deities to stay in downtown Kyoto for a week. Originally the Gion Festival included both the saki matsuri and ato matsuri. However, by the 1960s traffic and crowd concerns sparked their amalgamation into one week-long celebration, July 10 – 17. Ironically, the enormous crowds attending the Gion Festival and accompanying logistical challenges formed part of the rationale to separate it again. The Gion Festival returned to its original format in 2014, to the delight of traditionalists who continue to honor the festival’s spiritual meaning. 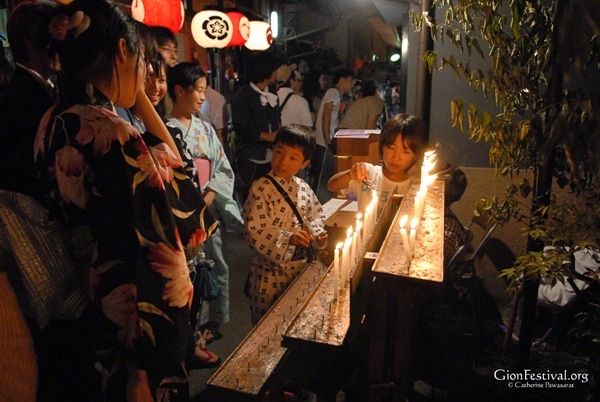 As in many of the world’s spiritual traditions, lighting candles, making prayers and paying respects is part of Shintō ritual.

Why does the Gion Festival have two parts? Or three?

The Gion Festival is essentially an enormous, multi-faceted purification ritual. 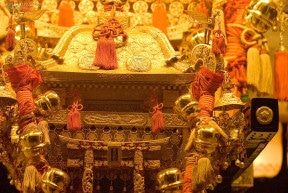 This is one of the three portable mikoshi shrines. They transport Yasaka Shrine deities through downtown Kyoto on July 17 and July 24.

At 6pm on July, hordes of men heave Yasaka Shrine deities on their shoulders from the Gion district to central Kyoto. They start at the east end of Shijo-dori street and finish at the intersection of Teramachi and Shijo streets. En route the deities bless the city and its residents. Think of the saki matsuri as a way for downtown Kyotoites to prepare and welcome the deities. The ato matsuri‘s role is similar, in reverse.

So what’s the Saki Matsuri timeline?

Construction of Saki Matsuri floats begins on July 10th. At this time, the largest floats (mostly hoko and the large yama on Shinmachi-dori street) start construction. Then the smaller yama start a few days later. The treasure display areas for the largest hoko begin to open on July 13. Each float’s chōnai community decides its schedule on its own. Everything is on display to the public on July 14, 15 and 16, from about 9am until around 10pm. Wandering around in good spirits yields festival and Kyoto gems. If you join the peak yoiyama, on the nights of the 15th and 16th, Shijo and Karasuma are closed to auto traffic 19:00-23:00. A flood of people, food and game stalls take their place. You’ll never forget the extraordinarily stimuli of the festive crowds.

July 17 brings the stately procession of 23 floats. This begins with the fully-decorated floats lining up along Shijo-dori near Karasuma-dori for a 9am start. Next, dozens of men heave them east to Kawaramachi-dori. Next the floats turn north and everyone walks up to Oike-dori. There the procession turns left, and heads west to Shinmachi-dori. Here the procession winds down around noon. Most noteworthy is the tsuji-mawashi corner turning. Since the float wheel axles don’t turn, it’s a remarkable feat. And a dangerous one. As a viewer, take heed: the corners are also the most crowded areas to watch the festival. Traditionally people believed that this journey of music and deities on the floats purifies the Kyoto streets. This prepares the way for the Yasaka Shrine deities to come on the night of the 17th. 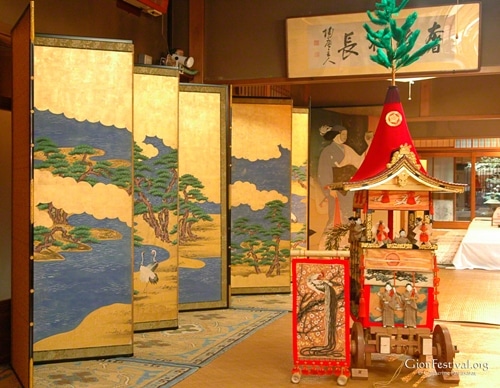 Local residents get in on the festival spirit by sharing their family heirlooms in the byōbu matsuri subfestival.

Meanwhile, some local residents and companies share the spirit of hospitality even more. They display their own private treasures, in a subfestival called the byōbu matsuri or “folding screen festival.” It’s discretionary, serendipitous and a lends a bouyant feeling of generosity.

How can I learn more about each float?

For more specific information about the floats, click the links in the Saki Matsuri drop-down menu at right.