Yamabushi at the Gion Festival: Supernatural Prayers to Benefit All Beings 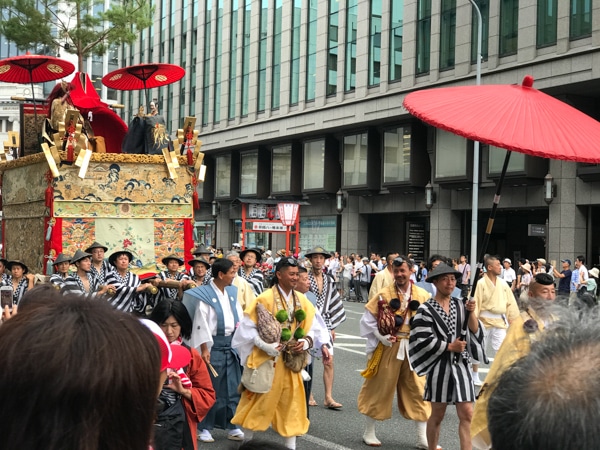 Yamabushi with En no Gyoja Yama in the Ato Matsuri procession on July 24.

Combining spiritual practices to benefit all beings with history, magic, myths, and legend, it’s challenging to be cooler than a committed yamabushi. Did you know that the Gion Matsuri and yamabushi share connections dating back centuries? And that dozens of yamabushi participate in Kyoto’s extraordinary Gion Festival every year?

Yamabushi tradition goes back more than a thousand years. It combines different sects of Buddhism with Shinto and Taoist beliefs and practices. Yama means “mountain” and fushi means “to prostrate.” This points to yamabushi’s cultivation of humility combined with intense awe and respect for nature.

Their path is called shugendo, which literally translates to “path of studying and testing.” It gives a feeling of constant refinement on the spiritual path.

Nature as The Source

Historically in Japan, mountains were both frightening places as well as sacred ones. Bandits fled to mountains, and people went there to die. So people considered mountains as homes to ghosts. Mountains were also highly revered as the source of life-giving rain.

Consequently, Yamabushi had the reputation of being somewhat wild characters. 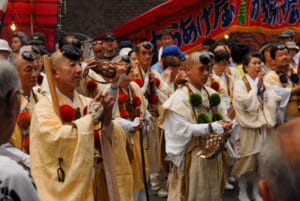 Practicing to Be One with All

Legend goes that yamabushi can manifest supernatural powers. These powers are part of the history of many Buddhist sects (i.e., mahasiddhis), Taoism (e.g. Taoist Immortals), and other spiritual traditions.

According to these paths, a disciplined spiritual practice cultivates a pure motivation to benefit all beings. It also results in intense powers of concentration. Often taking place in close connection with nature, such a combination enables a person to tap into the power of universal consciousness. Whatever the tradition, the being becomes integrated, or whole. That’s why they’re called “holy.” For such a being, mysterious and remarkable feats become possible.

Of course nowadays, some yamabushi have lives more similar to yours and mine. Check out this lovely interview Kokoro Media did with a contemporary yamabushi.

How Do Yamabushi Relate to the Gion Matsuri?

If you’ve read my book, you know that I believe the Gion Festival to be an urban ascetic practice. A Gion Festival musician first shared this view with me. If you’ve been to the Gion Festival, you’ll know what we mean. And you can imagine it’s even more pronounced for participants. 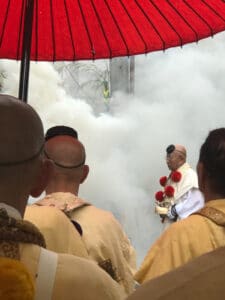 So it makes sense that yamabushi would be closely involved. And that a Gion Matsuri float would be dedicated to their 7th-century founder, En no Gyoja, or En “the Ascetic.” Through his spiritual practices, he developed some of the supernatural powers described above. They remain legendary today.
You can learn more about him on my webpage dedicated to En no Gyoja Yama float, or in my book, The Gion Festival: Exploring Its Mysteries.

Each year contemporary yamabushi visit En no Gyoja Yama during the Gion Festival’s Ato Matsuri. There they perform a fire puja while chanting the Heart Sutra. While different schools of Mahayana Buddhism emphasize different texts, the Heart Sutra has a profound influence on nearly all of them, particularly Yamabushi and Zen. Stay tuned for a blog on the Heart Sutra.

Visitors to En no Gyoja Yama can make a donation to write a prayer on a wooden gomagi prayer stick. The Yamabushi burn these in the goma-taki ritual mentioned above. You too can write your prayers on a gomagi and have them burned in the ritual. When else can you have yamabushi send your prayers off to the chanting of the Heart Sutra? 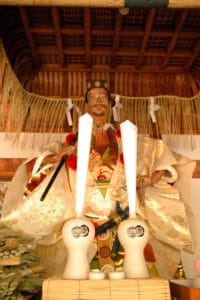 The sacred statue of Jozo Kisho at Yamabushi Yama.

Yamabushi also go each year to pay their respects to the 9th-century yamabushi Jōzō Kisho, celebrated at Yamabushi Yama during the Saki Matsuri. They also chant the Heart Sutra there, and do another goma-taki fire puja nearby, praying for world peace.

Meanwhile, you can still see the amazing pagoda (a special 3-D mandala-inspired building where sacred relics are enshrined) Jōzō Kisho straightened with his powers of prayer and manifestation. It’s located just south of Yasaka Shrine—parent shrine to the Gion Festival—in eastern Kyoto. Mostly pedestrian, it’s a very pleasant part of Kyoto to walk around.

If you’re fortunate, you may see yamabushi during your visit to the Gion Festival. Every element of their dress has a philosophical meaning. For example, the six distinctive pom-poms represent the six Buddhist Paramis, virtues that practitioners cultivate on the path to enlightenment.

Besides the activities above, yamabushi also walk throughout the Gion Festival communities visiting each community’s shrine. There they pay respect to the various deities and support the local people by chanting the Heart Sutra. If you have the good fortune to encounter them, see if you get a sense of their devotion, connection to nature, and disciplined practice. How does it feel? 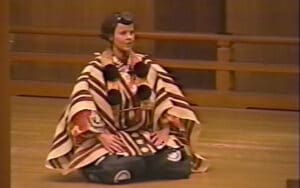 Me playing the role of a yamabushi in a kyogen play in the early 1990s.

Yamabushi hold a special place for me. I studied traditional kyogen theater in the 1990s with Living National Treasure Shigeyama Sensaku IV. My first role was that of a yamabushi, in the play Kaki Yamabushi. It was especially challenging because I had recently arrived in Japan and didn’t know much about the culture.

That was pre-internet, and I had a hard time understanding what a yamabushi was. I remember asking, perplexed, “Why do they pray under waterfalls?” Intrigued by the enigma, I tried my best to act like my idea of a yamabushi. And I’ve been trying to understand them ever since.

Interested in sharing this content? Check out the Creative Commons Attribution-NonCommercial-ShareAlike 4.0 International License for guidelines on how. This is a cool way to grow a culture of generosity. Generosity is the first of the six parami mentioned in the blog above. So it’s a practice worth cultivating.