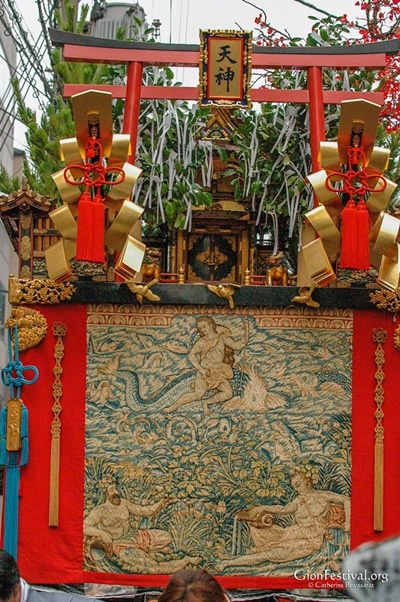 Arare Tenjin Yama is dedicated to “Tenjin-sama,” or the “Thunder Deity,” as is Abura Tenjin Yama. As the deified form of virtuous 9th-century scholar and statesman Sugawara Michizane, modern Japanese pray to him as a god of education. History tells us that though Michizane was unjustly wronged, he suffered with dignity, and after his death his enemies met with calamaties; for these reasons he presents an archetypal human experience that many can relate to. It’s estimated there are more than 35,000 Tenjin shrines throughout the country. “Arare” means “hail;” chōnai tradition holds that during a terrible fire in 1510, hail suddenly started to fall in this neighborhood, putting out the fire. Moreover, legend holds that a tiny statue of Michizane fell on the rooftops together with the hail, inspiring the neighborhood to dedicate this float to Tenjin-sama and the miraculous fire-quenching arare. The float miraculously survived the great fires of 1788 and 1864 that destroyed so many other floats (such as nearby Kikusui Boko); amulets sold here protect the bearer from fires and lightning.

Visitors pay tribute to this small statue of the god of education at Arare Tenjin Yama.

A narrow passageway from the street opens up onto this float’s meeting place and treasure display area, a lovely small courtyard adjacent to its traditional storehouse, a traditional urban planning package that central Kyoto is known for. Note the exquisite craftsmanship of the 1714 shrine to Michizane. Michizane loved plum tree blossoms: they’re the first flower to bloom and share their sweet fragrance after the bitter Japanese winters. You’ll see plum blossoms prominently featured as part of the Tenjin tradition.