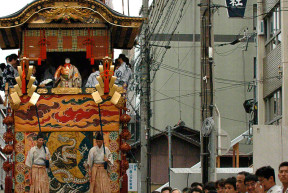 “Kikusui” means “Chrysanthemum water” and refers to a Chinese legend and Japanese noh theater play attributing eternal youth to drinking the morning dew from chrysanthemum leaves. Are you imagining that anyone could do that? First the youth wrote prayers from the Lotus Sutra regarding cultivating virtue and compassion on the leaves, resulting in dew with some magical properties indeed. We can see the chrysanthemum emblem all around this float: look for the symbol on the wheel hubs, for example. In the 16th century a monk and student of teamaster Sen no Rikyu (creator of the contemporary tea ceremony) located his small tea hut at the site of this float, next to a well with particularly sweet water. He named the well “Kikusui well” after the Chinese legend (by then also a Japanese noh play), and the float’s name came from this well. 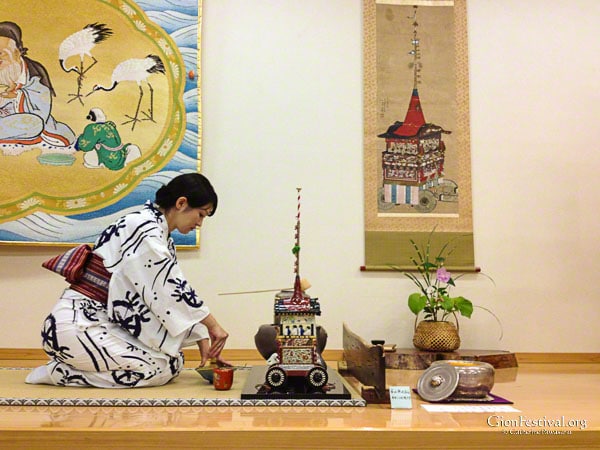 This float’s neighborhood has had ties to the tea ceremony since those times, and for 2000 yen you can refresh yourself from the festival swelter with mattcha tea (a.k.a. “Japanese espresso”) and tea sweet. Meanwhile you can enjoy watching tea ceremony, view some of the float’s treasures (in an air conditioned setting) and receive a chrysanthemum-shaped ceramic dish as a memento. Urasenke tea masters and their students come from all around Kyoto to help prepare and serve the tea. 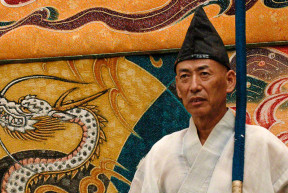 Kikusui Boko was reduced to ashes in the great fire of 1864, which devastated many of the festival. It was rebuilt in 1953, and we can imagine the hopefulness it must have inspired during Japan’s impoverished post-war era.