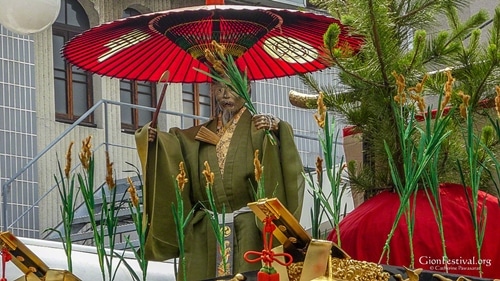 A scene from the noh play, The Reed Cutter, during the July 17 Gion Festival procession.

Ashikari Yama is based on a noh theater play by the 14th-15th century genius actor and noh playwright Zeami (pron. “Zay-ah-mi’), Japan’s answer to Shakespeare. It’s known that Zeami attended the Gion Festival, and some say that noh theater used to be performed on the Gion Festival floats before the actors were replaced with sacred statues.

The float features a scene of a man cutting river reeds, to sell for making mats and blinds. This is how his estranged wife first saw him after three years; they’d separated because they couldn’t make ends meet. She went to Kyoto’s imperial court to seek employment and he found work in present-day Osaka’s riverside, a lowly station. The float depicts this poignant moment of joy combined with sadness: having separated unwillingly and desperately, the wife travels to seek her husband out again, and finds him in reduced circumstances. Nonetheless they’re overjoyed to meet again, reunite, and move back to Kyoto to live together once more.

The smaller yama (like Ashikari Yama here) give us a better feel for the festival of yesteryear, when neighbors relaxed and enjoyed one another’s company and their float’s treasures.

The original head of the sacred statue at Ashikari Yama is signed by the famous Kei school sculptor Ko-un and dated 1537 – ! The original 16th-century kimono it wore is an Important Cultural Property and the oldest costume in the festival. Both are now displayed rather than used, for conservation’s sake; the replica statue head is “merely” a few hundred years old.

Ashikari Yama is fortunate to have a chōnai member who’s a professional interpreter. They’ve translated their basic float information into English, Korean and Chinese, a very recent (and very welcome) innovation.