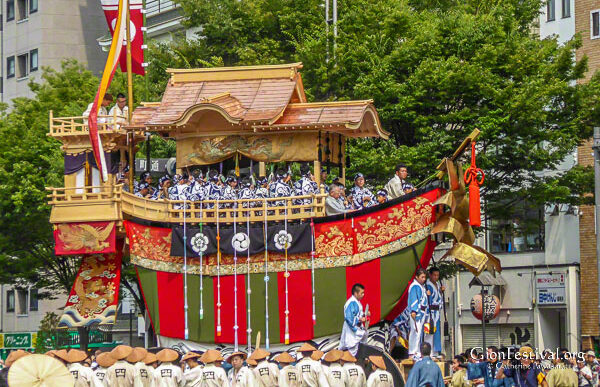 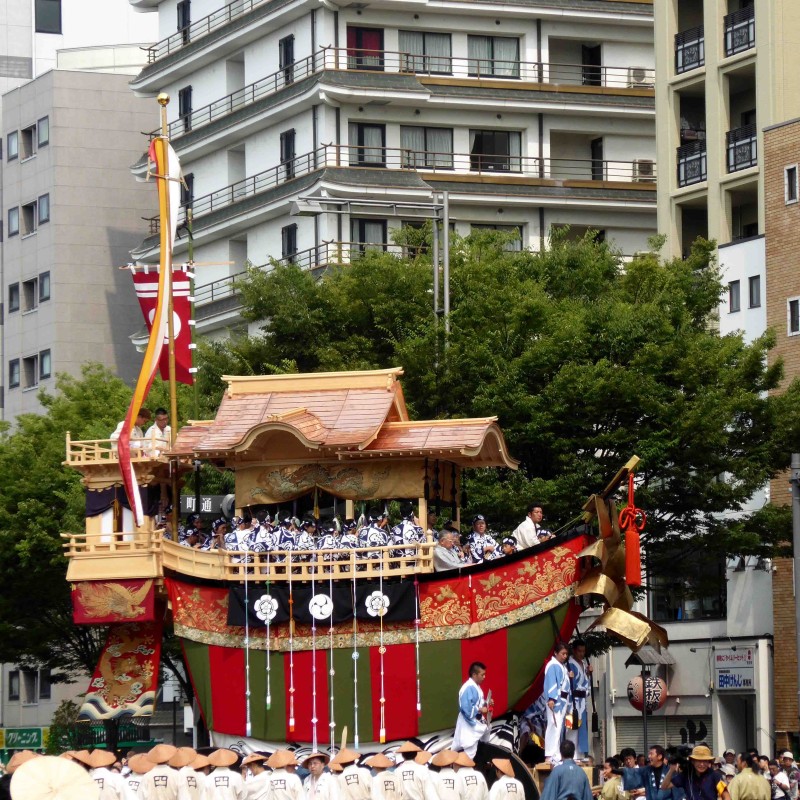 Rapidly changing times notwithstanding, in an 1100+-year event like the Gion Festival, transformation can be radical.

The year 2014 heralded the reinstitution of the Gion Festival’s annual processions to two parts, one on the 17th and another on the 24th.

Why do we care about dates and parts? Well, on the surface of things, there’s a tremendous amount of richness to the festival, and trying to enjoy and learn from it all in just the short five days when the float treasures have been on display (11-17 July) for the last half-century is an impossible (and sweaty) undertaking.

Since 2014 we can enjoy nearly double the time (11-17 and 21-24 July) to soak up the wealth of culture, history and cosmology, which spans centuries, countries and traditions. Read more about this under the individual floats’ pages by clicking on the links in the dropdown menus at right.

Looking more deeply, restoring the two processions has profound implications. Festival elders have told me that they were amalgamated into one procession and the traditional route changed in the 1960s, to cause less disturbance to the downtown traffic.

Some say this marked a profane transition of the Gion Festival from an annual tribute by Kyoto townfolk to Yasaka Shrine’s tutelary deities into a tourist event. Separating the processions again heralds a reclamation of the festival’s original spiritual meaning.

This is no small feat in an increasingly consumeristic culture, and tremendous kudos are due to the elders of the festival who have worked towards this for decades … and succeeded. There are a relatively small number of festival elders, whose families, homes and businesses have formed a mainstay of Kyoto culture for centuries. It’s an interesting phenomenon that they are so steeped in – and protective of – the festival’s hallowed traditions, that their perspectives are often refreshingly innovative and challenging to the status quo.

The procession on 17 July is called the mae-matsuri or “pre-festival.” After twenty-three of the floats and their treasures are on display to the public from the 14th-16th (streets are closed to traffic 6-11pm on the 15th and 16th), the floats take part in the procession from 9am on the 17th.

During the procession, essentially the floats travel through downtown Kyoto, beckoning to or welcoming the Yasaka Jinja deities; the latter will journey in portable shrines (mikoshi) from the shrine to the Place of Sojourn on the south side of Shijo-dori between Teramachi-dori and Kawaramachi-dori that night.

The floats’ procession is dignified and stately; before I became steeped in the festival culture and made many friends amongst the float patrons, I found it rather boring. Now I marvel at the creaking of the floats and how they hold up – they’re just beams lashed together with rope! – and the phenomenal patience and concentration of the musicians (about 50 of them crammed like sardines into a tiny space) and the men who arduously direct, pull and turn the floats with considerable risk, all in Kyoto’s unforgiving summer swelter. The procession comprises a rare, multi-generational rite of passage for these men.

The transportation of the mikoshi is, by contrast, a remarkably boisterous affair, as scores of men in loincloths carry the jostling mikoshi through many city streets between 6:30 and 10pm. The original purpose was to purify the city and its people of any malevolent spirits that might manifest as illness during Kyoto’s nefarious rainy season. It’s a fine opportunity to see Kyotoites cutting loose in a healthy way, in this time-honored ritual with a strong feeling of community.

The ato-matsuri, or “post-festival” takes place beginning with the new Ōfune Boko’s float construction on July 18, and its and nine other floats’ treasures displayed to the public between the 21st and 23rd.  From 9:30am on July 24th the ten festival floats travel from Karasuma Oike, down Kawaramachi to Shijo, then back to Karasuma, passing the Place of Sojourn to provide a send off to the deities before they are carried back to Yasaka Shrine beginning at 5pm the same evening.

I was so excited about the festival being restored to its original dual processions that I traveled from North America to attend: it was been fifty years in the making! Since the spiritual purpose of the festival is to pay respects to deities in order to receive their blessings, I imagine they’re pleased.