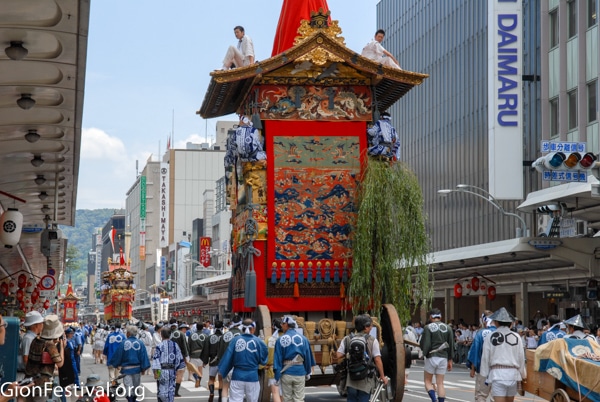 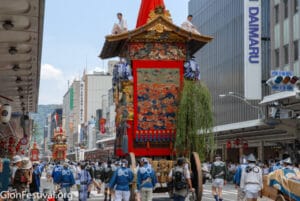 One of the Gion Festival highlights we’re all waiting for: the grand yamaboko junko processions.

Kyoto’s Gion Festival 2022 returns in July! The Gion Festival Floats Association has named that it would like the festival to happen “in as close to its usual form as possible.” But there will of course be safety measures to prevent the spread of the coronavirus. So what this year’s festival will be like still remains somewhat fluid.

In 2020 and 2021 the festival was dramatically altered and scaled back due to the coronavirus pandemic. Fears that festival crowds would increase coronavirus contagion led to an emphasis on prevention and safety instead. Normal years saw grand processions of yamaboko floats and portable mikoshi shrines on July 17 and 24. Instead, representatives of festival floats and the Yasaka Shrine (the Gion Festival’s official patron shrine) walked in procession with sacred sakaki leaves representing festival deities.

The Gion Festival floats procession was last cancelled in 1962. At that time Hankyu railway was constructing a train underground on the floats’ main route. Before that, the festival was dramatically scaled down in 1943-1946, because U.S. Occupation forces’ rules against public gatherings.

The government lifting of COVID-19 pre-emergency measures in Kyoto until March 21 helped spark the green light for this years’ yamaboko floats’ processions. In addition, many float patrons have been advocating in favor of the processions, since their historical purpose was to ward away epidemics.

Plans include the Gion Festival highlights—the floats’ grand processions on July 17 and 24, and the yoiyama and yoiyoiyama celebrations in the two evenings prior to those. This could change if Japan suffers a spike in corona cases. 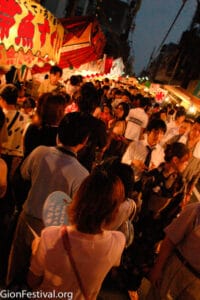 During yoiyama and yoiyoiyama on July 15 and 16, Kyoto streets in the Gion Festival neighborhoods will be closed as usual to vehicle traffic. Called “pedestrian paradise,” this opens up the festival for people to stroll at greater leisure.

This year, different from usual, on yoiyoiyoiyama, July 14, and during the Ato Matsuri’s yoiyama July 21-23, there will be no food stalls open and streets will not be closed to traffic.

Special safety measures will be implemented in the Gion Festival 2022, to support social distancing. Since food stalls and people-watching are a highlight of the Saki Matsuri (the first half of the Gion Festival, July 10-17), and it’s usually very crowded, Kyoto will need to innovate to keep the celebrations safe. Fortunately, though Kyoto is famous for its historic traditions, it also has centuries of innovation to draw on.

The Gion Festival Floats Association made the announcement in April, based on consensus among the respective floats’ conservation associations. These are usually made of up the float neighborhoods’ communities, including local residents, company employees, and friends and families.

This is all wonderful news for Gion Festival fans in Kyoto and Japan. But many international visitors will have to wait for Gion Festival 2023 or beyond. The Japanese government is currently only allowing business visitors and tourists in formal groups to visit from overseas. Plus, visas are required.

To obtain a visa, such visitors need a Japanese sponsor who registers the visitor with the Ministry of Health and Welfare. It’s hoped this will limit new outbreaks of the coronavirus coming from overseas.

I’m hoping to share live news from the Gion Festival 2022 with readers like you. I’m also waiting for my Japanese visa to come through, in time for the festival. Wish me luck! And stay tuned to gionfestivalorg’s Facebook, Instagram, and YouTube channels for updates, hopefully live from Kyoto.

In late 2020 I published my book, The Gion Festival: Exploring Its Mysteries, from my current base in British Columbia, Canada. Since then, I’ve been mailing copies one by one to the many Gion Festival elders who helped me do field work and interviews over my 25+ years of fieldwork. Sadly, some died before my book was published, or before I could get them a copy. This year I’m especially looking forward to sharing my book with more of my many Gion Festival friends in person. It’s a small way to express my appreciation for all they give to this amazing World Heritage Event that we all enjoy.

Who’s Impacted by the Gion Festival Amidst the Coronavirus?

Besides the thousands of participants who shape their lives around the Gion Festival, many businesses do too. The month of July, when the Gion Festival takes place, comprises a peak season, most obviously for hotels, restaurants, and shops.

In addition, there are festival-related industries such as the production of paper lanterns and amulets. Each float reveres a particular deity or deities, and amulets related to these deities are sold. The amulets offer visitors relief by alleviating common human concerns such as health, safe childbirth, fire, home protection, and so on. (Are these amulets the ancient origins of today’s insurance policies?) 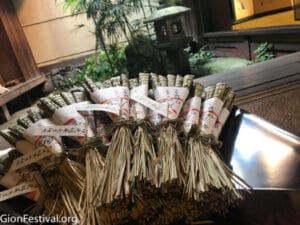 These chimaki await distribution to friends and family.

In particular, the Gion Matsuri chimaki are highly sought-after talismans. They are hung outside a door to protect a home or building from negativity for the year, until the next Gion Festival. These distinctive talismans can be seen outside doors all around Kyoto. They’re a major revenue source for the Gion Festival float conservation associations. Your souvenir purchases contribute to maintaining these historic floats and art treasures, an expensive undertaking.

At the Gion Festival 2019, the last pre-covid festival, chimaki sold out at several of the largest floats. Chimaki production was at full capacity, employing an entire small town north of Kyoto. There are long lines to buy chimaki at Naginata Boko, the first float in the July 17 Saki Matsuri procession. Not enough chimaki could be made to meet the demand.

The shrinking of the Gion Festival due to the coronavirus was tough on small, specialized traditional industries like paper lanterns and chimaki production. Hopefully, sales for the Gion Festival 2022 can help them stabilize. 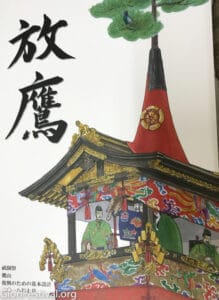 Gion Festival fans await the reintroduction of the Taka Yama float in the Ato Matsuri (the second half of the Gion Festival, July 18-24) this year, after an absence of almost 200 years.

During the 1826 Ato Matsuri, a terrible storm damaged all of Taka Yama’s decorations, beyond repair. So the community took a break from participating in the float procession until its treasures could be replaced. But before that could happen, nearly 40 years later, Taka Yama’s timber frame burned in Kyoto’s Great Genji Fire of 1864.

Just the heads and hands of Taka Yama’s three deities and a few other treasures survived these disasters. Since I started attending the Gion Festival regularly in 1993, I’d noticed that Taka Yama’s neighborhood community displayed these treasures every year to the public. Meanwhile, neighborhood members discussed when and how they might be able to rebuild their float.

Taka Yama community members have intensified their efforts to rebuild their float over the last decade. It’s an enormous undertaking, particularly since Kyoto’s downtown (where the Gion Festival takes place) is suffering urban flight and resulting social decay like many cities worldwide.

In a hopeful development, restoring Gion Festival floats like Taka Yama and Ofune Boko has become a community-building activity instead. That Taka Yama has made such progress amidst the coronavirus pandemic is a remarkable achievement. Omedeto (congratulations)! Its debut again in the Gion Festival 2022 gives people a chance to join in the celebration.

To learn more about the Gion Festival and how to plan your visit, get my book, The Gion Festival: Exploring Its Mysteries. It has received glowing feedback from Gion Festival community leadership and prominent international experts on Kyoto culture.