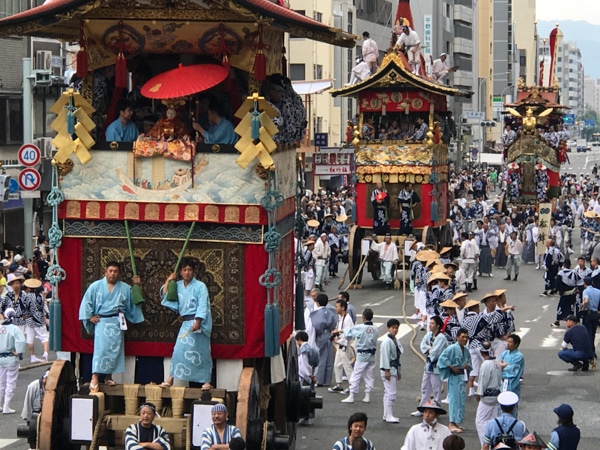 Pre-covid, three hoko and their teams line up to wait for the beginning of the Saki Matsuri procession.

KYOTO––The 2021 Gion Festival will again be held on a much smaller scale than usual, same as 2020. Once more this is due to the covid virus and concerns about it spreading in public gatherings.

The highlights of the annual festival are the processions of the gigantic yamaboko floats on July 17 and 24. These have been cancelled this year by the Gion Festival Floats Federation (Gion Matsuri Yamaboko Rengokai).

However, the massive public events attract more than one million visitors annually. Festival organizers are naturally concerned about the potential spread of the covid virus in the close proximity of crowds in downtown Kyoto.

The festival has continued almost uninterrupted since 869, during Kyoto’s hot, summer rainy season. Before modern antibiotics and sanitation, Kyotoites were at risk of illness and death related to standing water and hygiene. 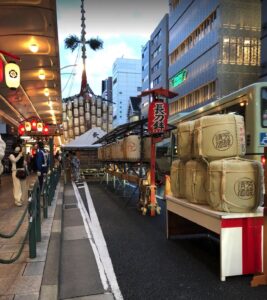 Even the area by the extremely popular Naginata Boko float is empty of crowds this year. Photo courtesy Jodi Nicholson.

It’s not all bad news, however. The most essential elements of the festival will still take place.

The resident deities of Yasaka Shrine—the patron deities and shrine of the Gion Festival—will be supplicated by core members of the Gion Festival community. These are the deities that the Gion Festival officially prays to for good health and wellbeing each year. Their spirits will still be transported through the streets of central Kyoto, to summon these good qualities.

Usually their spirits are transferred to mikoshi portable shrines, but in 2020 and 2021 they’re being transferred to leaves of the sakaki tree, considered sacred and purifying in Japan’s indigenous, nature-based Shinto faith. The Gion Festival is officially Shinto.

In recent years the Gion Festival has become a gigantic tourist attraction. Supplying accommodation, food and other products and services to the multitudinous visitors is a major economic driver for Kyoto. Scaling the festival back is a significant economic blow to the city and businesses.

However, the smaller scale of the festival is helping remind everyone of the roots of the Gion Festival roots. The events that will take place will center around the Gion Festival deities, their residence at Yasaka Shrine, plus various festival float neighborhoods’ respective purification rituals, which serve to transform various kinds of negative energies into positive ones, believing this ensures good health. During the covid epidemic many of us are appreciating the value of good health and wellbeing with a new perspective. 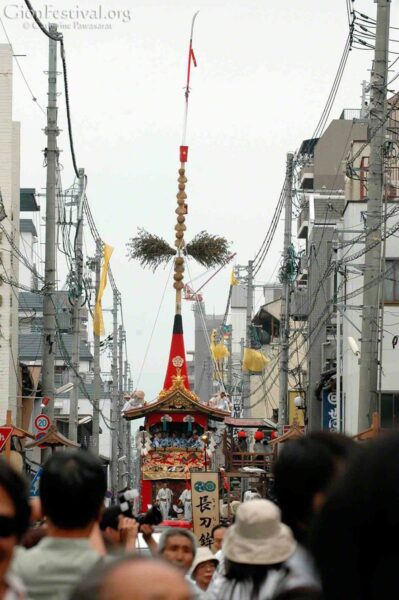 Naginata Boko’s easily recognizable by its distinctive halberd atop its central pole.