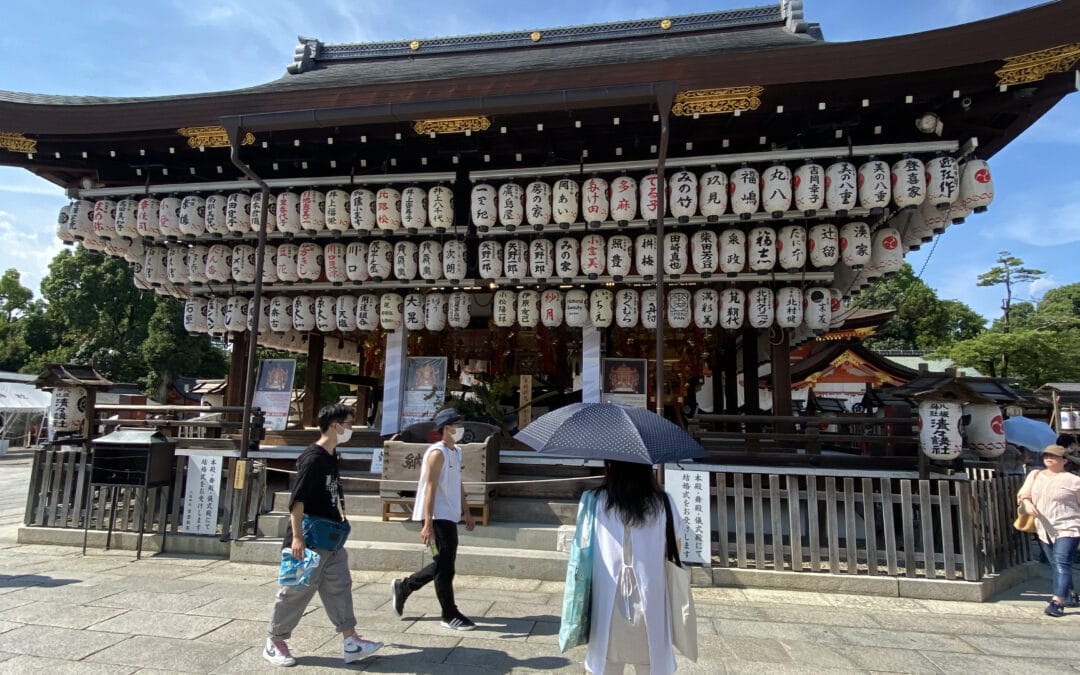 The Yasaka Jinja is usually buzzing with visitors during the Gion Festival, but not in 2021. Image courtesy Jorie Johnson.

No doubt the Gion Festival community and Kyoto authorities felt heartbroken to scale back the Gion Festival 2021 due to covid. Of course, this was just one of countless heartbreaks around the world during the pandemic.

But how we respond to heartbreak is what makes the difference. The Gion Festival community responded in 2021 with dignity, commitment, and creativity. Like all of us, the festival communities had to change how they do things. And they adapted in ways that were meaningful for them, and for the public, while staying safe.

Some of the largest events were canceled. In particular, the great processions of yamaboko floats on July 17 and July 24—the most 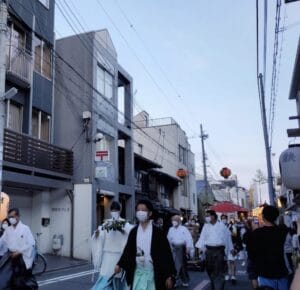 The procession of the Yasaka Shrine deities, symbolized by a sacred sakaki leaf. It traveled throughout the Gion Festival float neighborhoods. Image courtesy Emiko Aizawa.

famous part of the festival—didn’t happen. Neither did the processions of portable mikoshi shrines to and from Yasaka Shrine on the same evenings. Instead, a minimum number of Gion Festival and Yasaka Shrine officials walked in procession. Wearing masks and maintaining social distancing, they performed small but highly symbolic purification rituals. These rituals serve to drive away negative energy, to allow health and general wellbeing.

Fundamentally, the Gion Festival is an enormous, month-long collection of Shinto rituals. Shinto is Japan’s indigenous, nature-based faith. “Shinto” translates to “Way of the Spirit.”

Unlike in 2020, in 2021 Gion Festival communities built 18 of the 34 yamaboko floats, a process called yamaboko-tate (“float construction”).

Why is that? There are two official reasons. For one, the Gion Festival communities need to conserve the tradition of yamaboko-tate. It’s an extremely specialized form of construction, passed on through centuries in an apprentice-like system. The floats’ supporting structures are large wood timbers. Carpenters fit them together with joints and then lash them together with large ropes. The carpenters tie the ropes in a multitude of functional and beautiful ways. 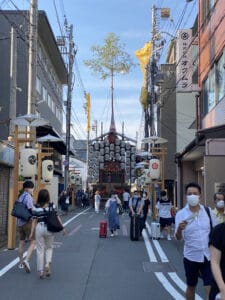 During the processions, you can hear the gigantic wooden beams rubbing against each other.  They have to be tied together securely, but with enough flexibility to give a little as they move.

Without the carpenters’ specialized knowledge and skills, the yamaboko floats couldn’t safely journey for hours through the city streets. The floats couldn’t carry the dozens of Gionbayashi musicians either.

The second official reason to do yamaboko-tate in Gion Festival 2021 was to air out the float treasures. These are stored away all year, and generally, only come out for the festival. Sometimes mild damp or insects may get into storage. Checking them and airing them each year prevents any major damage that might accumulate over time.

Plus there was a major bonus. The Gion Festival neighborhoods and anyone who happened to be passing by could still enjoy the spectacular festival floats this year. While, of course, wearing masks and maintaining social distancing.

Praying for an End to Epidemics

There may also be an unofficial reason for the yamaboko-tate in 2021. The Gion Festival started in the year 869, to pray for an end to a terrible epidemic. In that era, it was just one of an average three per decade. 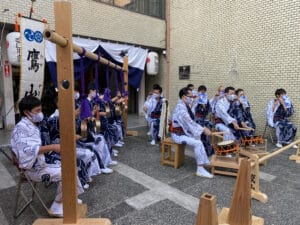 Before modern science helped us understand hygiene, Kyoto suffered terribly from deadly epidemics that spread during the hot summer rainy season. Antibiotics only came to Kyoto in the 1950s. Consequently elders today still recall family members who died from the “summer sickness.”

Many Gion Festival community members naturally felt torn. Since the Gion Festival’s original purpose was to pray for an end to epidemics, don’t we need it most now, during covid? Perhaps the yamaboko-tate was an acceptable compromise.

Each Gion Festival neighborhood has considerable autonomy. So each one could decide for itself how to celebrate this Kyoto festival this year. Some kept their floats and treasures in storage. Some built and decorated their floats only. Others only displayed their deity’s sacred statue. Among the floats that were built, many of their Gionbayashi musicians also played music on the floats. Others performed a symbolic “procession” on July 17 and 24: in some cases the ondotori “drivers” stood on the floats and waved their fans. In others, people pulled the float just a few meters and back.

The Gion Festival has only entirely ceased once, during the devastating15th-century Onin War. Aside from that, it has been scaled back a few times before. For details, see my previous blog.

In a sense, the Gion Festival is deeply related to impermanence. Each year it calls for an end to death and illness, while remembering those who have died. To be sure, with more than 1,150 years of history, the Gion Festival is an enduring symbol of the power of community, and of Kyoto itself. Continuing each year, even at a smaller scale like the Gion Festival 2021, helps us remember that, together, the human spirit can prevail.

No doubt many prayers were said this year for an end to coronavirus and related deaths. And for a full Gion Festival 2022.