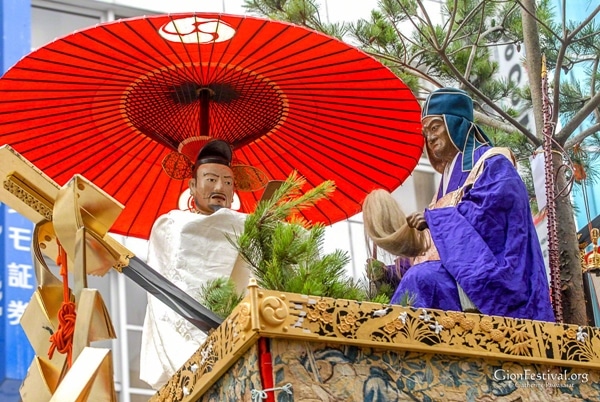 Dōrin featured some of the “crazy wisdom” and eccentricities Zen is known for; for one, he was known to sit in a pine tree, which we can see when this float is in the July 17 procession. Hakurakuten was a prolific poet, famous for his social conscience and accessibility; in classical China, poetic skill implied some facility with philosophy as well.

In this scene the poet asks the Zen master, “What’s the essential meaning of the Buddhist teachings?” Master Dōrin replied, “Commit no evil, do good deeds!” Dismayed at this simple answer, the poet responded, “Even a three-year-old knows this!” 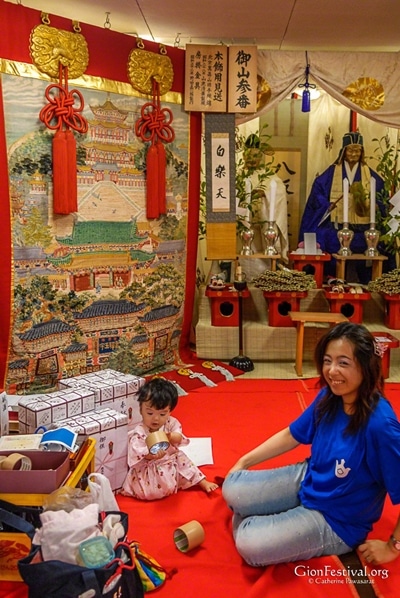 At some yamaboko, like Hakurakuten Yama, we may still enjoy the Gion Festival’s original family- and community-centered orientation.

Master Dōrin said, “A three-year-old may know it, but even 80-year-olds can’t do it.” Hearing this, Hakurakuten bowed and took his leave.

This scene demonstrates that Hakurakuten’s understanding of Buddhist philosophy was nascent. However, by bowing when he heard Dōrin’s reply, he showed that he possessed the remarkable virtue of being able to recognize this himself.

Hakurakuten Yama has recovered from both the fires of 1788 and 1864; numerous floats have never been revived, indicating the strength of this chōnai’s spirit. The Hakurakuten Yama community has continued to commission and purchase unique textiles, including a depiction of Beijing’s Temple of Heaven, woven by a famous Japanese artisan in the early 20th century.