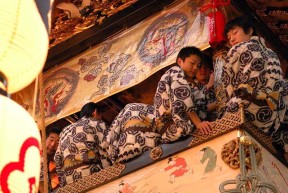 Hōka Boko’s ohayashi musicians play for the public during yoiyoiyama, two nights before the 17 July procession.

In the middle of various hoko floats’ shingi “mast pole” are tiny shrines containing small statues of deities, sacred parts of the float ornamentations. It’s said that Hōka Boko’s figurine is a Hōkazō, or renunciate monk. Forsaking the material world, this particular kind of monk wandered, spreading Buddhist teachings. At times in Japanese history they engaged in street performance as a way to interact with the populace, disseminate teachings, and receive alms, not unlike a court jester: Were they entertainers? Wise men sharing esoteric insights? Semi-crazed rascals? Opinions differed. Traditional nō theater features a play and kyōgen theater features a dance named Hōkazō on this theme. 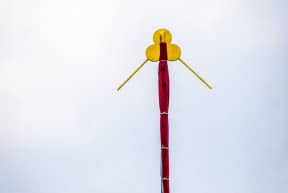 Each float’s symbol atop its central pole is a unique talismanic identifier; this is Hōka Boko’s.

The simple symbol atop the Hōka Boko’s shingi “mast” represents the sun, moon and stars, indicating more of the festival’s cosmic connections. Of all the floats’ statues, only the Hōka and Tōrō Yama floats’ are articulated. During the July 17 procession, Hōka Boko’s is skillfully manipulated, closely mimicking the dance that Naginata Boko’s living chigo-san performs. 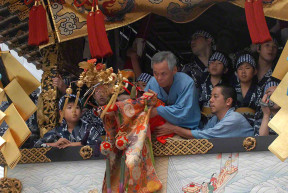 Hōka Boko records show that until 1927, it had a live chigo-san just as Naginata Boko does. It’s also known that it began using the current doll in 1929, though the reasons for the changeover are unknown. Every year the Hōka float’s position in the July 17 procession is fixed, towards the end: all the floats on Shinmachi-dori (the procession’s final thoroughfare) need to be well coordinated so that they can arrive back to where they started, without blocking one another’s way. You can watch the carefully orchestrated maneuvering at Oike-dori and Shinmachi-dori, between 11am and noon.