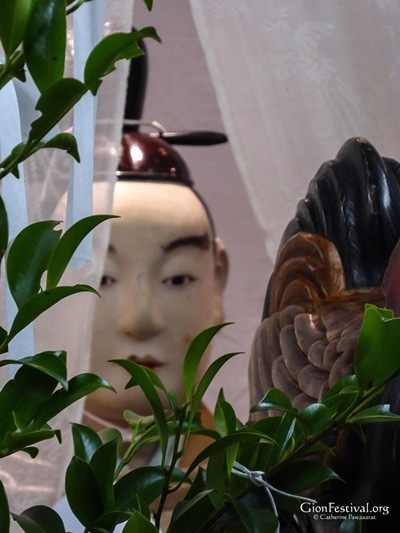 Iwatō Yama depicts three major deities from Japanese history and mythology: Amaterasu Ōmikami, Tajikara No-Mikoto and Izanagi No-Mikoto. Their remarkable tales come from the 8th-century Kojiki and Nihon Shoki. These are Japan’s two oldest texts, which document earliest Japanese history and culture. The primordial Japanese deity Izanagi No-Mikoto got together with his partner Izanami No-Mikoto to co-create the Japanese islands and Japanese people. The Kojiki tells us that Amaterasu was born from his left eye, similar to the Greek deity Athena emerging from Jupiter’s thigh.

Amaterasu is best known as Japan’s primordial sun goddess, from which, legend tells us, all of Japan’s emperors descend. The float name Iwatō Yama means “stone door float.” This recalls a legend when Amaterasu became angry with her mischievous younger brother and god of storms Susanō No-Mikoto, the central deity of the Gion Festival and Yasaka Shrine. Her rage led her to hide away in a cave, and block its opening with a large boulder. When the sun goddess shut herself in a cave, that meant darkness for everyone and everything on the planet. What to do? 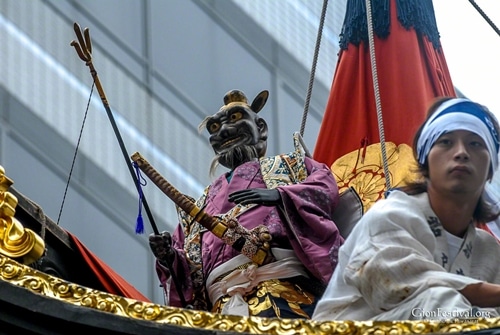 Izanagi and friend high up on the rooftop of Iwatō Yama during the July 17 procession. Daring men ride up top to move electrical wires out of the way, so the floats can pass.

The deity Tajikara No-Mikoto, reknowned for his physical prowess, pushed aside the boulder blocking the cave entrance. Other deities could then lure Amaterasu and her sunlight back out. After Amaterasu emerged, Tajikara No-MIkoto pushed the boulder back in place so she couldn’t hide again. He literally saved the day.

An intriguing feature of Iwatō Yama is that its sacred statue of Amaterasu depicts her as a male. This is a good example of Japan’s long and diverse history of gender flexibility: see also Kita Kannon Yama. In addition, Iwatō Yama and Ennogyoja Yama are the only two floats that pay respects to three deities, a kind of spiritual abundance. To keep us on our toes, Iwatō Yama is one of three yama (together with Kita and Minami Kannon Yama) that look like a hoko. Though its general float shape is like the larger hoko, note that its central mastpole remains a pine, like other yama.