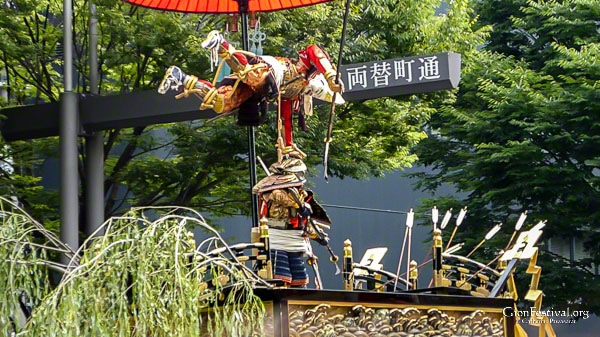 The Uji Bridge was a strategic crossing on the way to Kyoto. In the Battle of Uji, they were defending the Minamoto clan from oncoming Heike samurai. Records note that Jōmyō fought with bow and arrow, halberd (warrior monks’ signature weapon) and sword and dagger. Moreover, records claim he continued fighting even as he was shot through with over 60 arrows.

Meanwhile, the crush of fighters trapped Ichirai at the far end of the bridge, away from the action. He came up with a solution, an incredible combined act of courage, determination and acrobatic prowess: he catapulted over the head of Jōmyō in front of him, to get to the front lines. And, in quintessentially Japanese style, it’s said that he asked pardon for his bad manners as he leapt. Consequently for some time, Jōmyō Yama’s nickname was the “Pardon My Manners Float”

Jōmyō Yama depicts the incredible courage and prowess of these two warriors. 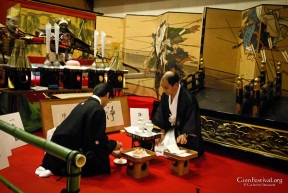 During the July 24th procession, make sure to notice how Jōmyō Yama’s sacred statues of Ichirai and Jōmyō tremble as the float moves. The sculptures were an incredibly remarkable engineering innovation for their time. In addition, the Jōmyō statue’s armor, from 14th-16th century, is an Important Cultural Property.

Another noteworthy feature of Jōmyō Yama its beautiful tapestries, reproductions of famous paintings of the Uji Bridge, site of the depicted battle. In addition, its chōnai still boasts numerous traditional residences and a family neighborhood feeling.