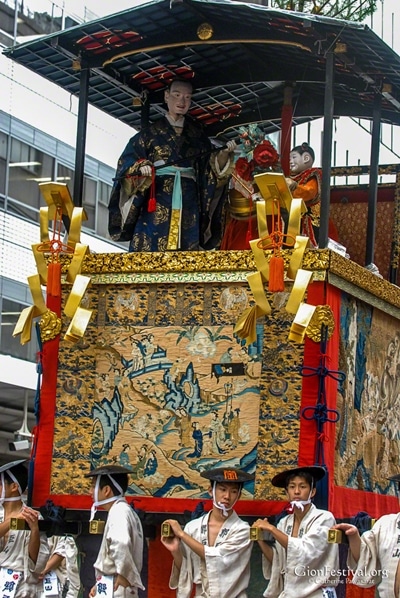 Kakkyō and his son rejoice after finding a pot of gold.

Kakkyō Yama demonstrates a story of family allegiance and respect for one’s elders, a central theme in Confucian teachings. For Confucians, an elderly person is the living vehicle of decades of experience and wisdom, and in that sense more valuable than less experienced youth.

Guo Ju (Kakkyō in Japanese) was a poor Chinese man whose family was suffering from acute hunger. Heartstricken, he determined to sacrifice his own son’s life, so that there would be more food for his elderly mother.

While digging a grave in which to bury his son, he found a pot of gold, his reward for his filial piety. This float shows he and his son rejoicing. Incredibly, Guo Ju’s grave still exists as part of The Dutiful Son Temple, a pilgrimage site in China. 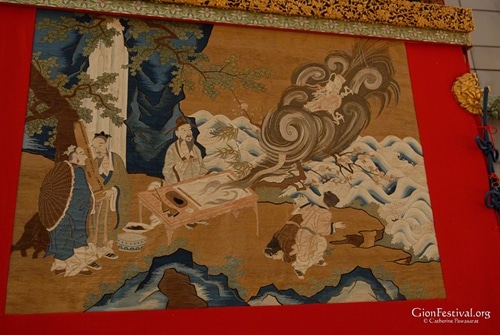 Those accomplished in Taoist practices experienced things ordinary mortals do not: after this Taoist painted a dragon, it flew off the page into space.

Kakkyō Yama has shown the foresight to make basic information on its float available in several languages. They also have an outstanding website, with details presented simply and thoroughly in Japanese (including details of a visit by Ernest Fenellosa in 1888). The availability of information on floats can vary greatly, so this is more exciting than it may sound.

Note the large textiles at the treasure display (adorning all four sides of the float during the 17 July procession), each with Chinese themes. The originals (which you can identify by their earthy colors, now faded) are from the 18th and early 19th centuries. Two depict fantastic tales of Taoist Immortals. You’ll also notice that this is the only yama of this type with a roof.