Minami Kannon Yama celebrates Kannon, the Japanese name for the Buddhist bodhisattva of compassion. Devotion to Kannon has spread broadly over space and time. She’s known as Kwan Yin in China, in male form in Tibet as Chenrezig, and Avalokiteshvara in India.

Two floats are devoted to Kannon: Minami Kannon Yama and Kita Kannon Yama, the southern and northern Kannon floats, respectively. This refers to their respective positions on Shinmachi-dori street. This one boasts a stunningly beautiful antique statue of Kannon. Visit its 2nd-story treasure display area to admire her.

Additionally, its treasure display area features four exquisite, centuries-old panels embroidered with a dragon, tiger, phoenix, and tortoise. These textiles used to adorn the float, giving us an idea of the fortunes and artistic expertise locals invested in their neighborhood’s float.

Each of these four animals is a symbol for one of the four directions in Chinese geomancy, or feng shui. In the 9th century, experts used feng shui to locate and design the imperial capital of Kyoto.

The blue dragon resides in the eastern direction. Moreover, it’s said this dragon lives beneath the main hall at Yasaka Shrine, the Gion Festival’s patron shrine. This is why we see so many dragons in the Gion Festival artwork.

Just like paintings of saints from medieval Europe, most of the decorative elements in the Gion Festival tell a story or make this kind of meaningful reference. 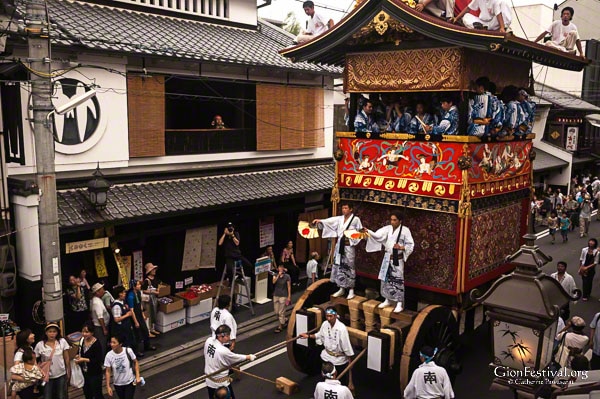 Walk along this street to get a sense of what downtown Kyoto and the Gion Festival looked and felt like before Japan’s economic bubble.