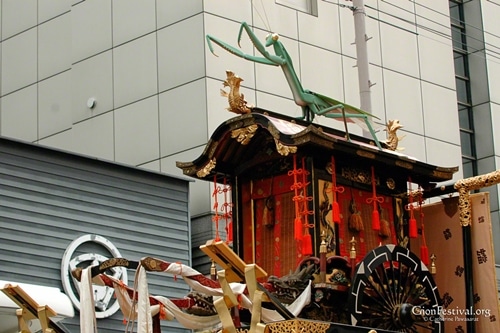 Everyone delights in the mechanized mantis’s antics during the 17 July procession.

Tōrō Yama or the Mantis Float refers to a Chinese proverb. It relates that, though a mantis is not strong enough to stop an oxcart, it may be brash enough to give it a try. Beyond the proverb, Tōrō Yama is dedicated to a 14th-century Kyoto noble, Shijō Takasuke, who unsuccessfully took on an enemy much stronger than he, the future shōgun Ashikaga Yoshiakira. The Shijō clan lived in this area; it’s said that 25 years after his death (1376) his family contributed this float, depicting a mantis automata atop an oxcart, to the Gion Festival procession. It was surely a bold political statement for the time – apparently hutzpah ran in the family. 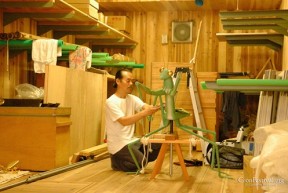 Tamaya Shōbei IX is the only living Karakuri Ningyo Master in Japan today from an unbroken lineage.

Tōrō Yama was destroyed by the great 1864 fire, and reintroduced in 1981. Remarkably, the oxcart and mantis survived and were preserved from the early 1800s, and a master artisan was available to get it in working order and operate it during the festival. The mantis’ mechanization must have been a wonder in centuries past. Tamaya Shōbei IX travels from Nagoya each year to manipulate the mantis, a type of automata called karakuri ningyō. All four of Tōrō Yama’s main tapestries are contemporary works by the famous yūzen dyeing artist and Living National Treasure, Tokio Hata. Kyoto is famed for this difficult and subtle dyeing technique. The reintroduction of a float like Tōrō Yama is a major commitment by a community, at a time when economics and urbanization are making for more businesses and temporary residents in downtown Kyoto. There are 24 yama and 10 hoko today, and some report that at one time there were 49 yama.