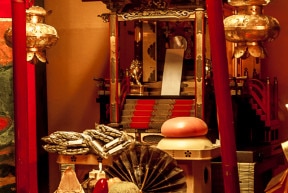 The Abura Tenjin float features a small Shinto shrine dedicated to the 9th-century courtly scholar Sugawara Michizane. Inside the shrine is a statue of him that reportedly belonged to a noble family that lived in the float’s neighborhood in the Heian Period (794-1185). This suggests that this neighborhood’s residents have venerated Sugawara for about a thousand years. In addition to being a talented man of letters, Michizane was a virtuous and influential imperial advisor. He was unjustly slandered and consequently banished from court; though he remained loyal to the emperor, he died in disgraced exile. Thereafter his adversaries suffered mishaps, many of which involved thunderstorms. To appease his spirit, the emperor had him deified as a thunder god, or tenjin. Learn more on the Arare Tenjin Yama page. This float is located on Abura-Koji street, giving the float the rest of its name. 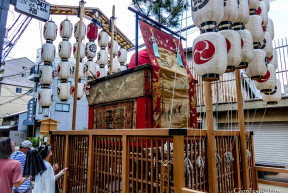 Beautiful antique textiles adorn the Abura Tenjin Yama float before the procession on Jul 17, while newer ones are on display in the chōnai treasure display area.

While many chōnai choose to have replicas made of their antique textiles, Abura Tenjin Yama’s chōnai members undertook considerable research and chose the Lady and the Unicorn tapestry in Cluny, France as the inspiration for new textiles they commissioned for their float, “because the Gion Festival tradition is about gathering and sharing the best from around the world,” one chōnai member continued. “The tradition is to put out new things, and think of them as the best, like people showing off our new clothes. This way of thinking is important for the festival – this is how it’s always been.”