The Victorious Return of Ōfune Boko 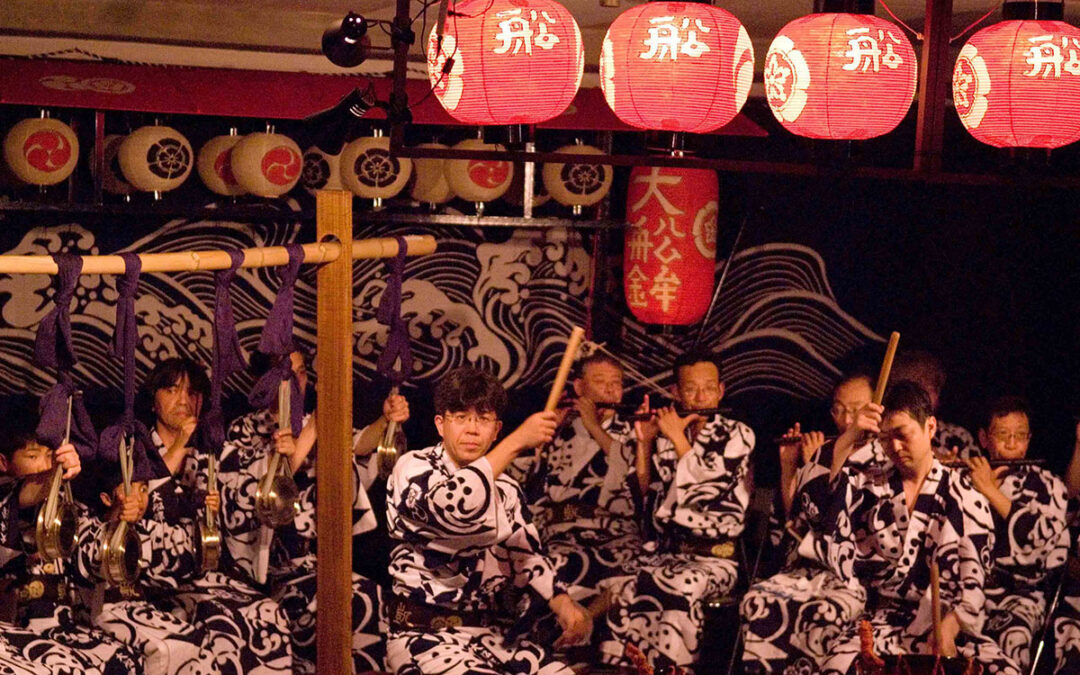 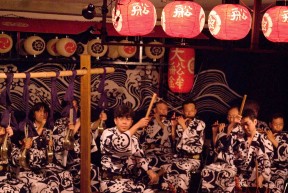 With an 1100-year history, the Gion Matsuri or Gion Festival is working with an unusually long-term perspective. Seven generations sounds like a stepping stone by comparison! I first heard the Ōfune Boko hayashi music troupe play in 2005. There are displays of treasures whose floats were destroyed by fire (Taka Yama and Hotei Boko, for example), and I was intrigued at this music troupe without a float. It’s standard knowledge in the festival that it takes ten years of year-round rehearsing to be able to begin performing the music, so this is a major commitment from people who don’t have a recent tradition of their own float. While the festival accepts new participants with the right introductions – with a dwindling downtown population, this is one way the festival has adapted to modern circumstances – generations of participants really pass the baton and form the glue that holds the festival together. 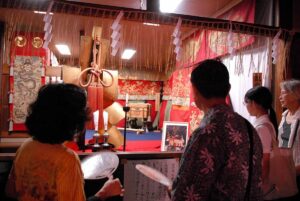 After more than 130 years of absence, the display of the Ōfune Boko treasures were a cause for celebration.

Then in 2006 Ōfune Boko (the Great Ship Float) began to display its treasures during the festival, after a 150-year absence. The hoko itself was one of several that were destroyed in the great fire of 1864, though the treasures were miraculously saved. There were rumors that the community was trying to bring the float back. To be honest, recreating a float from scratch is such a monumental undertaking, and the festival timeframe is so long-term, that I wondered whether it would happen in my lifetime, even when I saw the flyers inviting financial and other sponsorship. Who would bring it back? Nowadays communities form around the existing floats, and without a float, is there a community? How would it be defined? Who decides? And they did it. Amidst the current economic climate and the major changes in the communities of central Kyoto and the festival itself, it’s a truly astounding feat! Great credit is due to festival elders for being open to dramatic changes in the way things are done. The Ōfune Boko community collaborated with the Fune Boko (Ship Float) community and Ritsumeikan University’s Art Research Center on an innovative approach to bringing back Ōfune Boko. While the floats and their component parts have been measured, and when parts wear out they are replaced with a duplicate, in truth no one knows how a float is built from scratch. This is particularly true for Fune Boko and thus Ōfune Boko, with their unique boat shapes. Some of the timbers are massive and thus ancient, and all the parts are custom made, so it was unthinkable to give creating Ōfune Boko a try, and then have it not actually work. Moreover, people get on the float and ride the float, so safety is a major consideration too. 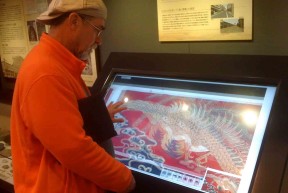 Modern Bonus: ARC created an interactive digital display for Ōfune Boko exhibit; touching the screen allowed visitors to zoom in on ultra-high-rez images of the float’s treasures, for example, revealing details we can’t see during the festival.

Ritsumeikan’s ARC is an interesting intersection of traditional arts and cutting edge technology. They’re known for their outstanding digital reproductions; international museum’s have hired ARC to make digital archives of their collections of Japanese prints, for example, so that researchers can work with the artwork without hastening their demise by handling fragile paper and exposing sensitive pigments to light. ARC worked with the Fune Boko chōnai to do high-precision, laser measurements of all of their float’s component parts. The new parts for Ōfune Boko were carefully made to these specifications.