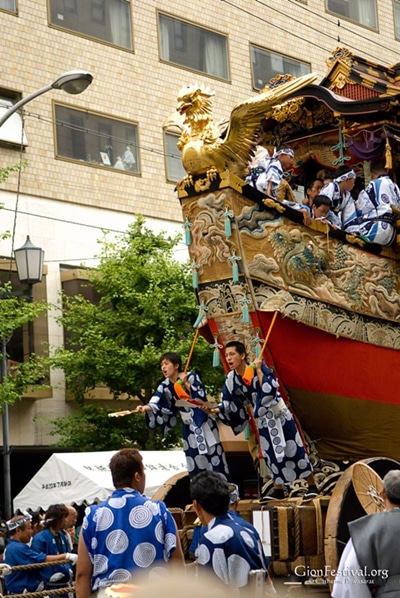 Fune Boko plies the waves of people in downtown Kyoto during the July 17 procession.

“Fune” means ship and this ship-shaped float is much beloved for its unique form. It refers to the legendary voyage that Empress Jingū made to the Silla Kingdom (the present-day Korean peninsula) in the third century. The Ōfune Boko represents the same ship, on its journey back to Japan. Empress Jingū is a fascinating and controversial personage. While her title is “Empress,” in those ancient times she would have been more of a shamanistic tribal leader. The tale of her voyage to Silla is full of divination (one such scene is depicted at Urade Yama) and the interactions between gods and humans. In addition to a historic statue of Empress Jingū revered at Fune Boko’s display area, you’ll also see statues of three deities who enabled her journey to be successful (from left to right as you face them): Ryūjin, the dragon god of the sea; Kashima Myōjin, a war god also related to safe maritime travel; Sumiyoshi Myōjin, a guardian deity of seafaring travel. 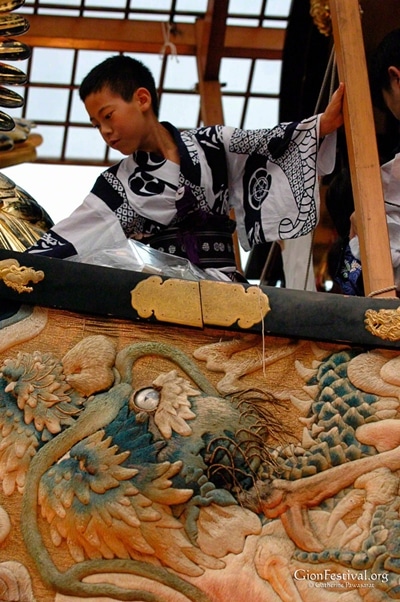 This float is known for its gilded painted, 3-D embroidered dragon tapestry, and inlaid mother-of-pearl rudder, which are just some of this float’s exquisite treasures. Taking time to go slowly and enjoy the details brings rewards. Fune Boko has been a festival leader in striking a balance between tradition and innovation. This offers promise for both the conservation of Gion Festival traditions and their adaptation to the modern world. When it rebuilt its float’s display area, for example, it did so in a traditional style; ironically this was an innovation without precedent in the festival.