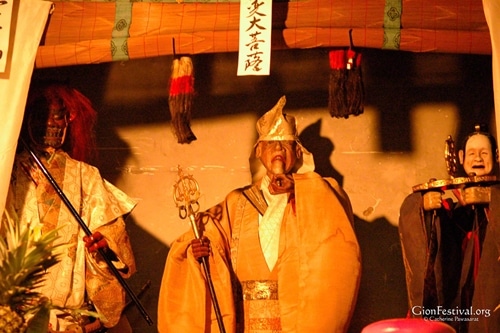 At center is the sacred statue of En no Gyōja, with the goddess Katsuraki on the right and the god Hitokotonushi at left, both appearing as ogres.

En no Gyōja is the semi-legendary 7th-century personage who later came to be considered the “founder” of shugendō, a belief system and ascetic practices undertaken by practitioners known as yamabushi. Still practiced today, its profound philosophy, mystical esteem for nature and rigorous practices have inspired the likes of beat poet Gary Snyder. It’s said that the power generated by En no Gyōja’s ascetic practices gave him powers of healing, of superhuman abilities, and of the ability to command gods, demons and humans. It’s said that he directed the two deities with him at this yama to construct a bridge between two sacred peaks in Nara Prefecture, where yamabushi still practice today. 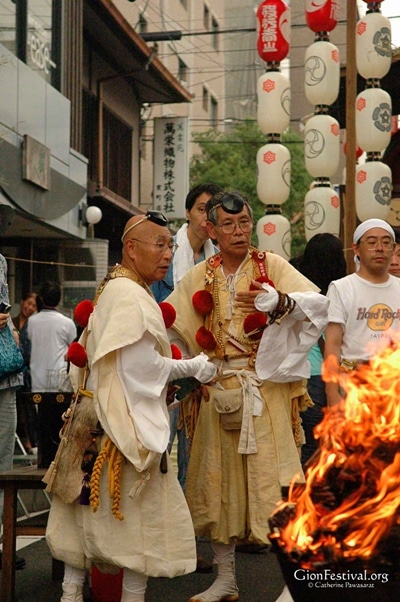 Modern-day yamabushi visit this yama every year to pay respects to their founder. See the Yamabushi Yama webpage for more about yamabushi. En no Gyōja Yama has an unusually diverse collection of mostly original treasures, including many Chinese tapestries depicting dragons, painted scrolls of the yama throughout the centuries, and even a map of locations of yamaboko throughout history. The latter shows names and locations of yamaboko that no longer exist, comprising a good example of how these valuable artifacts shed light onto the Gion Festival’s past. 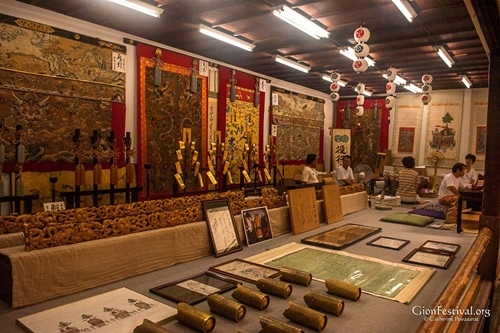 The En no Gyōja Yama display area is filled with a fascinating and diverse assortment of treasures. Note the blue-green map of present and past yamaboko’s locations.