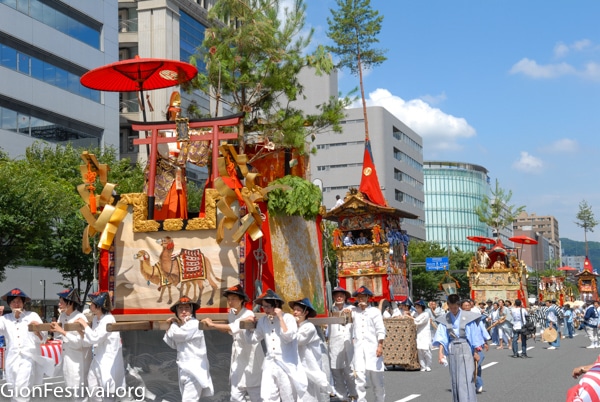 Several yama in the Ato Matsuri floats’ procession on July 24.

The spectacular Ato Matsuri floats procession, an iconic part of the Gion Festival. [/caption]Dating to 869 C.E., Kyoto’s Gion Matsuri shines as a beacon of more than a thousand years of Kyoto and Japanese culture. Learn here about the extraordinary historical and cultural gifts it shares over the entire month of July, making it arguably Japan’s most famous festival.

What are the Gion Matsuri’s Origins?

In the 9th century, central Japan suffered from regular outbreaks of terrible plagues, resulting in widespread death and destruction. Torrential downpours, high humidity, and intense heat mark Japan’s rainy season. And in those days, medicine and sanitation were not well developed. The densely populated capital city of Kyoto was especially prone to eruptions of diseases like malaria, cholera, and dysentery.

At that time, people believed that angry spirits (called onryō in Japanese) brought illnesses and other calamities, as revenge. Consequently, the Japanese Emperor Seiwa called for a ritual to appease these spirits. The ritual was named a goryo-e, a meeting of honorable spirits. This name called for the transformation people were hoping would take place. They believed that, through prayers and other forms of placation, spirits could willingly change their demeanor, and help people instead of harming them.

The original ritual involved 66 hoko, long pikes, or halberds. There was one for each of 66 regions that made up the country at that time. We don’t know what happened after the first goryō-e. But when another epidemic struck, the emperor called for another one, and then another, and so on. By a century later, it was an annual event.

What Deities Does the Gion Festival Celebrate?

Gion Festival float patrons walk in procession in the rain. Rainy season is still an important part of the Gion Matsuri.

Initially the goryo-e likely addressed the spirits of people who had suffered unjustly from political intrigue during their life. But over the centuries, the spiritual focus of the festival has shifted.

For centuries now, the central deities of the Gion Festival have been Susano-o no Mikoto, Princess Kushi Inada, and their children. These deities’ primary shrine is Yasaka Shrine in Kyoto’s Gion district, giving the festival its name. Susano-o no Mikoto is the god of storms, the original agents of water-borne illnesses and related damage (like floods). Kushi Inada is the goddess of rice, irrigated by the summer storms. Of course, historically rice has had sacred status as the primary source of nourishment for all Japanese.

In addition, each yamaboko float celebrates its own deity. Some are Shinto, some are Buddhist, some are historical figures (such as Prince Shotoku Taishi at Taishi Yama). The Gion Festival grew and shaped to support good relations between humans and beings from the spirit world. In this way, humans enlisted divine support for the ongoing balance between life and death.

Where did Today’s Gion Festival Floats Come From?

As mentioned, the original ritual included 66 hoko, upright pikes, or halberds. Gradually the halberds got decorated, and morphed into related shapes, like banners and umbrellas. They also grew in size: by 1000 C.E., many of the hoko needed wheels.

The 16th century saw a significant transformation in the social order and the Gion Festival. Kyoto’s merchant class emerged as a force to be reckoned with. The Gion Festival morphed from a formal aristocratic ceremony to a townspeoples’ ritualistic celebration. Kimono merchants, in particular, began to accumulate serious wealth. The disgruntled upper classes made it illegal for the lower merchant class to dress or build ostentatiously. However, decorating the Gion Festival floats—collectively called yamabokoFloats—presented an opportunity for kimono merchants to flaunt their wealth. 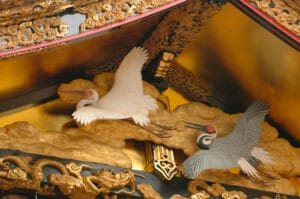 Artistic wood carving, lacquer and metalwork decorate a yama below its roof peak. The Gion Festival floats feature the best arts and craftsmanship available in Kyoto over centuries.

As time passed, the ornamentation grew more and more elaborate. Different Gion Festival float neighborhoods competed against each other to have the most exquisite floats. When the Tokugawa shogunate virtually closed Japan’s borders to outside trade and influence, Gion Festival neighborhoods found ways to procure foreign textiles. Displaying rare, exotic, and essentially black market artworks dazzled the populace. Thanks to centuries of wealthy kimono merchants, local residents and businesses, and thousands of volunteers, we can enjoy the spectacular Gion Matsuri as we know it today.

The Gion Matsuri’s most prominent features are the 34 yamaboko floats. The festival is dedicated to the Yasaka Shrine deities, but the uniquely beautiful yamaboko capture most of the public’s attention.

The public can watch their fascinating construction process in the early days of the Saki Matsuri and Ato Matsuri. Then it’s possible to board some of the larger floats and visit some of the float communities’ shrines to their respective float deities. After float construction, treasures related to the Gion Festival are also on display to the public at the same location.

Another highlight of the Saki and Ato Matsuri is the Byobu Matsuri or “Folding-Screen Festival.” Historic residents and companies generously display historic heirlooms—such as folding screens—to the public. Because it’s entirely discretionary, the displays vary year to year. However, the Ato Matsuri has a stronger Byobu Matsuri, especially on Shinmachi Street, north of Shijo. 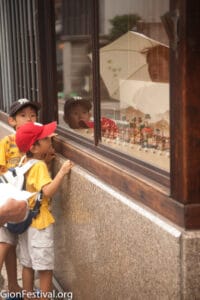 Enjoying miniature yamaboko floats on display during the Byobu Matsuri.

The most popular times to visit the Gion Festival are from the evenings until late into the night on July 14-16 and July 21-23. These evenings are called yoiyoiyoiyama, yoiyoiyama, and yoiyama, respectively. Yoi means “eve” or night before, referring to the great Gion Matsuri floats’ processions on the mornings of July 17 and 24. These processions are arguably the most famous single events of the month-long panoply of activities known as the Gion Matsuri. During the Ato Matsuri float procession on July 24, the smaller “Hanagasa Junko” or “Flower Umbrellas Procession” also occurs. It features geisha from the nearby Kyoto geisha districts, professional dancers and musicians, and their students. These professionals also perform on the central stage at Yasaka Shrine from the afternoon. 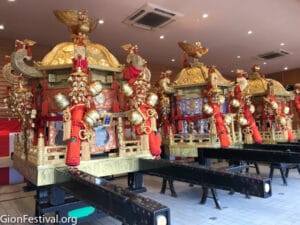 Temporarily residing in portable “mikoshi” shrines, the Yasaka Shrine deities stay downtown at the otabisho for one week, between July 17 and 24.

On those same evenings, thousands of men carry the Yasaka Shrine deities in portable mikoshi shrines from eastern Kyoto through downtown neighborhoods. They stay for a week (July 17-24) at the otabisho “visiting place” at the Teramachi Shijo intersection. Though less known than the yamaboko floats, these deities, mikoshi, and processions form the spiritual core of Japan’s most famous festival. Officially speaking, all the other Gion Matsuri events revolve around these deities. And the mikoshi processions are boisterous, family-oriented happenings.

Buy my book for a detailed schedule and list of activities for the month-long Gion Matsuri.

We can group yamaboko into two types of float: 24 yama and ten hoko. UNESCO named the yamaboko floats’ procession as one of its first World Heritage Events.

Six of the ten hoko are several stories high, with a remarkably tall shingi—an ornamented spire-like pole—at their center. The shingi connects the heavenly world with the earthly one, spirits with humans. A hoko can weigh up to 12 tons and require up to 50 men to pull them through the streets of Kyoto with long, thick ropes. 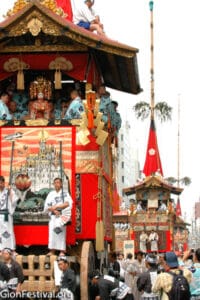 Several hoko await the start of the Saki Matsuri floats’ procession on July 17.

The 24 yama are generally smaller than the hoko. Most of them feature a pine tree at their center, instead of a shingi. Some of the yama are so big that they are pulled by dozens of men with long, thick ropes, like the biggest hoko. Other yama are rolled along the streets of Kyoto by men shouldering level wooden supports.

But the distinctions between yama and hoko are not so clear. A few hoko are closer to the original Gion Matsuri hoko, consisting of large umbrellas set into a wheeled float. Two other hoko are in the form of boats, without a shingi. Some yama look like hoko, except they feature a pine tree instead of a shingi. And two yama feature a bridge, without a pine tree.

Each person has their own favorites, perhaps determined by a personal connection or experience with that float or community. The first float in the July 17 procession each year, Naginata Boko, and the boat-shaped floats (Fune Boko and Ofune Boko) are remarkable and probably the most widely known. Generally speaking, if you’re interested in the arts, the larger floats have a greater quantity of antique treasures on display. But remember that the display areas are not large, and items are rarely curated in English. Smaller floats have treasures too. They are generally more community-oriented floats and easier to access. They have fewer crowds and may provide visitors with a more unique or intimate experience.

The Gion Matsuri is a massive and diverse collection of events with over one thousand years of history. Buy my book to learn all about Japan’s most famous festival. Relax, follow your interests and intuition, make new friends in the festival community, and enjoy.

Get my book, Gion Festival: Exploring Its Mysteries, for the best, most comprehensive, and cutting edge (tradition meets social impact!) information on Kyoto’s incredible Gion Matsuri. I’m please to gift you a free excerpt here.