Empress Jingū divining her fate during the July 17 procession: the curved instrument she holds is a fishing rod.

Urade Yama shows a scene where the 3rd-century Japanese shamaness ruler known as Empress Jingū used fishing as a divining method. Depending on the number of fish she caught, the gods communicated whether or not she’d be victorious on her potential journey to the land of Silla, part of the modern-day Korean peninsula. Apparently the fish nibbled; “Urade” means roughly, “prophesize and go forth.” Japan’s most ancient texts convey that she traveled to Silla and, with the gods on her side, “conquered” it without fighting, returning to Japan with abundant tribute. Besides Urade Yama, Fune Boko (“Ship Float) depicts Jingū’s ship on its way to Silla, and Ōfune Boko (“Great Ship Float”) is the ship returning, greater for its riches. One can’t help but wonder whether it was the remarkable woman’s magnetism that empowered her to win such gains without battle. 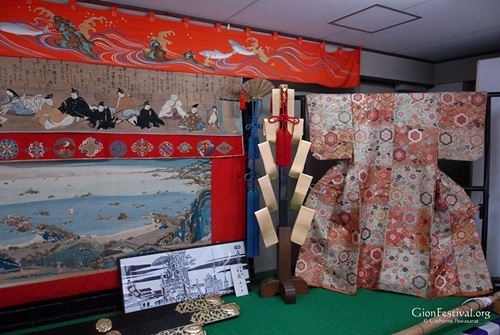 Urade Yama’s treasure display area is unusual in that it’s located in the lovely courtyard of a Shinto Shrine. The treasures include textiles depicting Japan’s 36 Immortal Poets and the country’s three most famous scenic places, as well as the fish who foretold Jingū’s fate. Empress Jingū is known for being pregnant during her two-year journey, and for giving birth to a healthy baby boy on her return (her son became the Japanese Emperor Ōjin, later deified as Hachiman, revered at Hachiman Yama). Consequently she’s considered a protectress of safe childbirth, and amulets are sold here for the same. Over the centuries Japanese aristocrats who enjoyed healthy childbirth gifted their own precious kimono to the deity and her float in thanks; thus you’ll see many valuable kimono among the treasures displayed at Urade Yama’s shrine. Note also the warrior-empress’ swords on display.