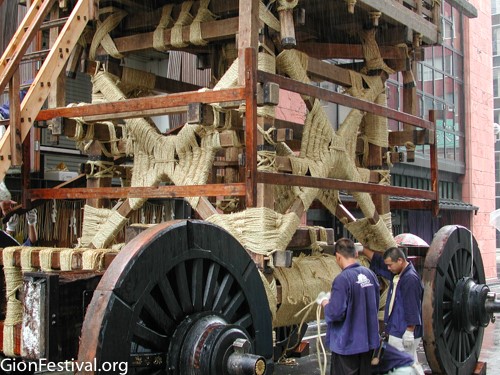 Though the Gion Festival floats processions have been canceled in 2021 for the second year in a row due to covid, Gion Festival Yamaboko Floats Association officials and Yasaka Shrine representatives announced that 18 floats would be constructed and decorated this year.

Building the gigantic Gion Festival floats requires an extremely specialized form of carpentry. Its ongoing transmission to a younger generation of carpenters is essential to conserve the techniques for the future, announced the Floats Association officials.

Moreover, for conservation purposes, the floats’ decorations benefit from being aired out once a year. Keeping them stored away risks their optimal preservation.

Out of the 34 total Gion Festival floats, 18 will be built and decorated. 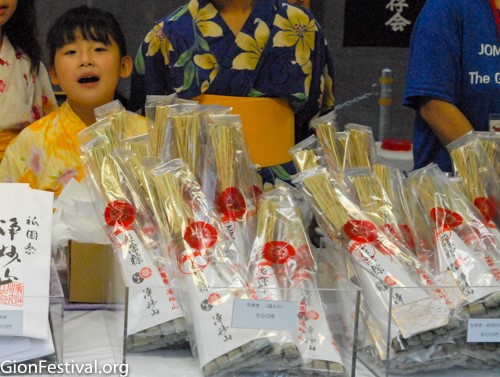 Some float neighborhoods will also sell the famous Gion Festival chimaki talismans, made to protect households and residents from harm for the year.

Chimaki sold out in 2019, when the farming village that produces them could not make enough to meet demand. The scaling back of the Gion Festival in 2020 and 2021 has been a tough economic challenge for the villagers to face.

Buying chimaki supports them and this traditional product, as well as providing much-needed funds for Gion Festival float conservation.

Similar to 2020, floats’ representatives will walk in procession from Yasaka Shrine to the otabisho “visiting place” located at Shijo Teramachi intersection. The Yasaka Shrine/Gion Festival deities will be represented by sacred sakaki leaves and other sacred implements used in Shinto purification rituals.

The order that representatives will be determined by a mix of tradition (some floats’ positions are the same each year) and lottery.

The lottery will be held for floats preservation association representatives at City Hall in early July, according to tradition.

To prevent the spread of the corona virus, the Floats Association officials asked the public to refrain from gathering.

See an update on how Gion Festival 2021 went in my follow-up blog.