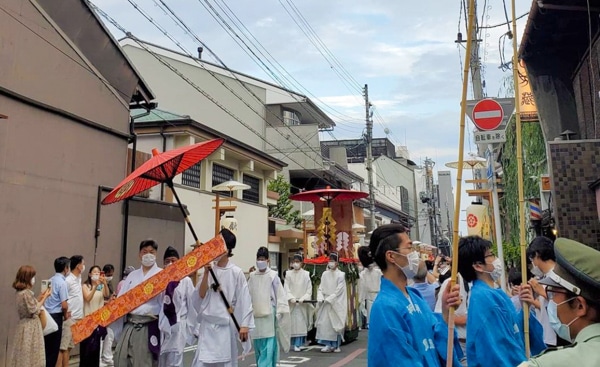 Gion Festival fans around the world are wondering: will there be a Gion Matsuri 2022? What kind of shape will it take?

We won’t know until the Gion Matsuri Yamaboko Rengokai (Gion Festival Floats Association) makes an official announcement to the press, probably in early May. Until then, even the yamaboko floats communities don’t know for sure.

The Gion Matsuri’s roots go back to the 9th century. They formed around ending and warding off epidemics (read more about this in my book). Plagues were a regular problem in Kyoto, because of rainy-season conditions: heat, humidity, standing water, and a dense population. Also, this was before modern sanitation. Until antibiotics became available in Japan in the mid-20th century, Kyotoites still died of the “summer sickness.”

Gion Matsuri elders hold and transmit the matsuri’s traditions, which are largely experiential and oral. When these elders were children, family members and friends died of the summer sickness. So they still strongly feel that this is the Gion Festival’s raison d’ȇtre. To them, suspending the Gion Matsuri due to an epidemic is painfully ironic.

“It feels devastating that the Gion Festival has been suspended for two years in a row due to covid,” shared a former director of a Gion Festival float. “This is precisely the time for us to demonstrate the true power of this epidemic-eradicating festival. I’m praying for an end to the epidemic.”

The Gion Festival’s structure is one of its most interesting features. Like an ecosystem or the human body, it’s a massive, semi-autonomous, interdependent, self-organizing system. 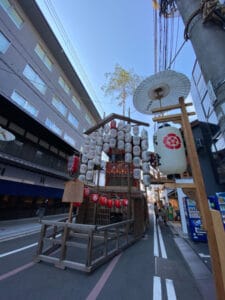 Minami Kannon Yama was built in 2021 but the crowds stayed away due to covid. Image courtesy Jorie Johnson.

Then there are 34 yamaboko floats communities. Each one has its own decision-making power and processes. Their commitment to holding the annual Gion Matsuri is backed by more than 1000 years of historical momentum. Generally speaking, they undertake to hold the annual Gion Matsuri as usual, unless conditions make this impossible. Then they look at what’s possible.

The Yamaboko Rengokai is a central organizing body for the floats. It’s particularly active liaising between the Gion Matsuri communities and various government entities, and with the media. But the Rengokai does not dictate policies. 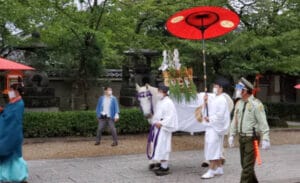 And of course, there are important public organizations that are working to keep Japan safe and healthy as we live through these years of covid together. No doubt their opinions will be carefully considered.

Being able to come to a consensus regarding such a historic and cultural institution like the Gion Matsuri, and among so many different stakeholders, speaks to the Japanese culture of wa, or harmony. This ethic is particularly strong in Kyoto.

On March 1 Prime Minister Kishida extended Kyoto’s quasi-emergency status until March 21, along with 17 other prefectures. On the other hand, Japan reopened its borders to non-Japanese nonresidents for the first time in three months.

Covid has shown how resourceful and creative the Gion Matsuri community can be amidst challenging conditions. Public gatherings were banned due to covid in both July 2020 and 2021. But the Gion Festival chonai neighborhoods and Yasaka Shrine still honored some of the matsuri’s most essential elements. See links to blogs from that time below. 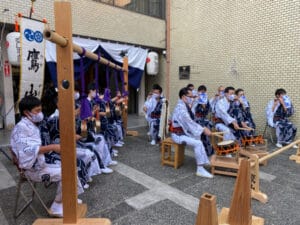 So here’s the big question: Can the Gion Festival community find a away to unleash the potential epidemic-eradicating power of Gion Matsuri 2022? While honoring the scientific and health imperatives in place to keep covid from spreading even more? What would you do in their position?

Here’s how the Gion Matsuri has unfolded during covid so far: