Hashi Benkei Yama 橋弁慶山 – Courage, Loyalty and the Tale of the Heike 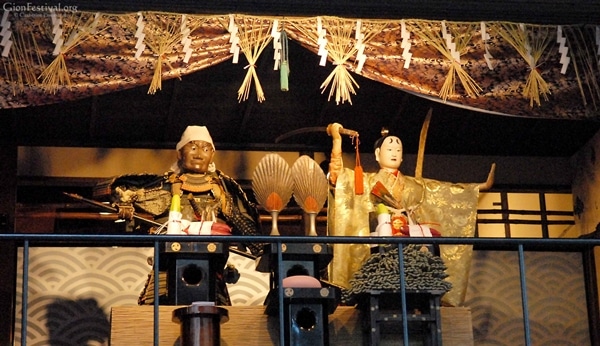 The sacred statues of Ushiwakamaru (right) and Benkei (left) on display in the days before the 24 July procession.

Hashi Benkei Yama depicts a famous scene in Japanese and Kyoto history, when the gigantic warrior monk Benkei challenged the diminutive but superhuman youth Ushiwakamaru on Kyoto’s Gojō Bridge, located about a mile from this float. Born into the Minamoto clan of the famed Tale of the Heike, Ushiwakamaru (later known as Yoshitsune) remains one of the most beloved figures in Japanese history. Impressed by his own unprecedented defeat and Ushiwakamaru’s incredible martial skills, Benkei became Ushiwakamaru’s loyal servant, and the name Benkei became synonymous with fealty. As a pair they made Japanese history. 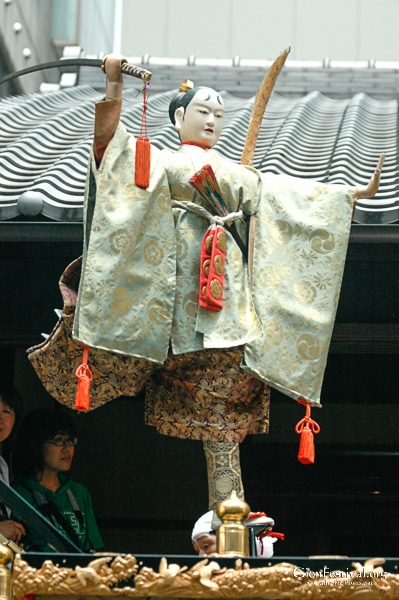 The sacred statue of Ushiwakamaru – note how it balances on one foot, atop the bridge railing.

The 16th-century statue of Ushiwakamaru stands on one foot, which must have been an incredible sculptural feat at the time. This float’s sacred statues and treasures are still displayed annually in a Kyo-machiya, or traditional Kyoto townhouse, this one similar in style to Yamabushi Yama and Hoshō Yama, where the sacred statues have pride of place on the second floor. Passersby can look up at the hallowed statues (similar to other spiritual traditions, it’s considered inappropriate to look down on something sacred), or conversely receive their blessings – in this case perhaps related to loyalty and courage – from below. Imagine what it was like 50 years ago when every float was in such a 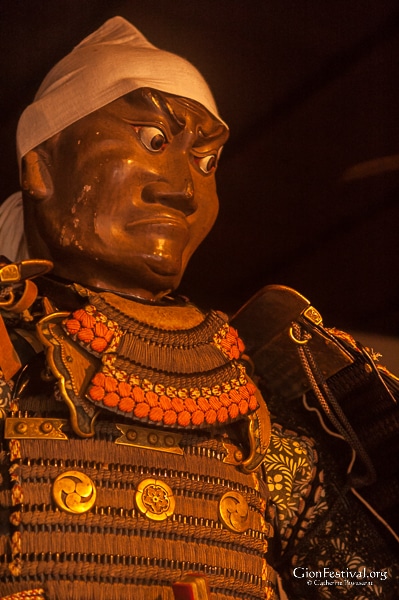 building, and every building in the neighborhood was a similar size and style: the Gion Festival was watched from considerable distances, with families sitting and picnicking on their tiled rooves. This Gion Festival cityscape is still treasured in the minds of the older generation.