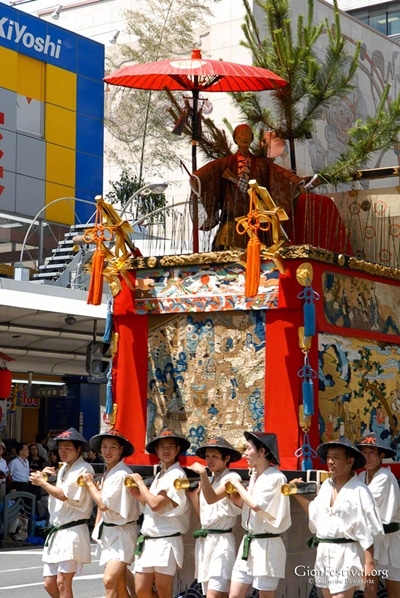 The horsetail cutter. Horsetails are considered the oldest plant on earth.

Tokusa Yama features the central figure from a noh play and chant, “Tokusa,” by the 14th-century genius Japanese playwright and philosopher Zeami. Tokusa is the horsetail plant, and the central character cuts horsetails for a living to make scouring brushes. In the play, his young son left home, went to Kyoto, and became a Buddhist monk. For most people in the 14th century, when people left home no one knew what became of them. The horsetail-cutter encounters a group of monks, shows them hospitality by inviting them to stay with him, and soon talks tearfully about his long-lost son, wondering what became of him. One of the monks reveals himself to be his son, and the two dance for joy. The Tokusa Yama shows the horsetail cutter as the monks encountered him. Noh has a strong transcendent element to it; rather than merely acting a scene, noh actors embody the spirits involved in the play, and transmit the depths of their experience and lessons in human and superhuman nature to the audience. Thus we see noh characters revered as Shinto deities in the Gion Festival. See Ashikari Yama and Kikusui Boko for more about noh in the Gion Festival, and special thanks to noh actress Rebecca Ogamo Teele for sharing its depths. 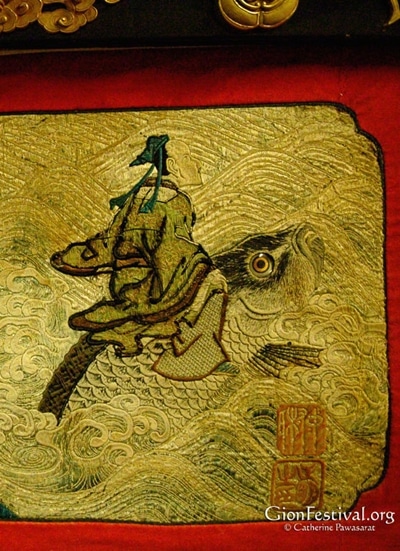 A Taoist Immortal enjoys some of the benefits of his spiritual practice.

Among Tokusa Yama’s treasure displays, see the metalwork depicting bats: “Bat” in Chinese is a homonym for “good fortune,” and thus bats are considered lucky (their insect-eating nature probably helps too). Everything you see in the festival has these kinds of layers of meaning. The rich embroideries show scenes of Taoist Immortals, whose intensive spiritual practices give them supernatural abilities, often related to their familiars.