Hachiman Yama’s dazzling array of treasures on display before the Jul 24 procession. Note the gilt shrine to Hachiman in the rear.

Hachiman Yama is dedicated to Hachiman, a divine protector of warriors, Japan and the Japanese people. Interestingly the food-producing classes class also worshipped him as the deity of agriculture and fisheries, making Hachiman shrines some of the most widespread in the country.

Hachiman is also the deified semi-legendary Emperor Ōjin, who purportedly lived in the 3rd to 5th centuries. The story of his life is related in Japan’s most ancient texts, where among other things he’s described as the son of Empress Jingū, revered at Fune Boko and Urade Yama. Ōjin’s also known for developing cultural exchanges with modern-day Korea and China.

Hachiman’s messenger is the dove, and you’ll see this bird in different manifestations among the float’s treasures. Note the stunning 18th-century gilt shrine to Hachiman. 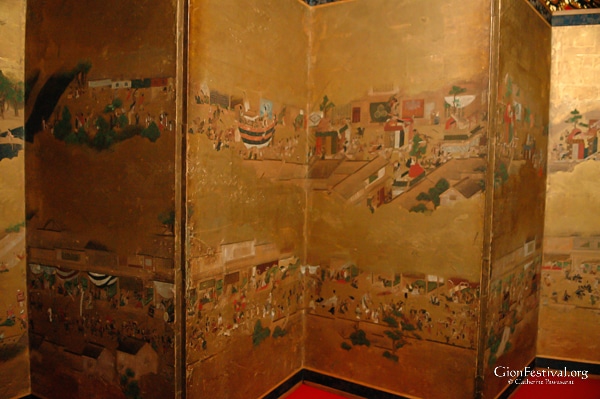 Conserved year-round in a museum, Hachiman Yama’s chōnai brings its 17th-century folding screen depicting the Gion Festival back during the festival each year. Such art gives us valuable information about the Gion Festival throughout the centuries.

In 2015 the Hachiman Yama chōnai collaborated with Ritsumeikan University’s Art Research Center to digitally measure the float’s component parts and construction. It’s a forward-looking development in this ancient festival; similar measurements of Fune Boko greatly aided in the recent reconstruction of Ōfune Boko, particularly since no other records of the latter’s construction existed.